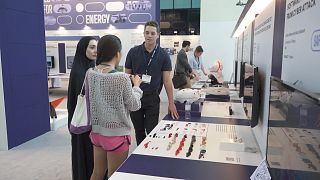 A chair that transforms into a life raft, a leftover banana crop repurposed into reusable bags; 100 of the world’s best brains come together with ideas that could save the world.

The brightest and youngest academic minds have descended on Dubai for the first Prototypes For Humanity event. 100 original, impactful, and innovative prototypes and technologies created by students and recent graduates across more than 100 countries have come together hoping to change the world with their creations.

Plastic pollution is a critical challenge globally. Germany had one answer on display that would help our Oceans; a low-cost river barrier known as ‘Trashboom’. The company behind it, Plastic Fischer says 80% of ocean plastic starts out as river pollution. The barrier targets it at its source as it is 300 times more cost-efficient to collect plastic before it reaches the ocean.

Moritz Schulz, Co-Founder & Design Advisor bei Plastic Fischer GmbH told Euronews, “We started in Southeast Asia, in Indonesia. We've been there for eight months to develop the thing in the field because we had no prior knowledge about it. Now we are scaling up, especially in India. We are active in six different locations and we have around 30 that are active, 60 full-time employees to take care of the waste management, and have collected 340 tons of plastic waste already.”

Also at the event was Filipino innovator Aleksander Wieneke who has developed a chair that can turn into a life-saving flotation device, after he experienced a typhoon at 9 years old. Like a piece of origami, it transforms in less than a minute into a life raft.

Aleksander Wieneke, Designer of NOAH says, “Decades later, you'd expect us to be able to better manage flooding. But it remains to be a problem. And so, I thought, okay, we should be able to help those who are vulnerable. It's not just the problem of drowning, electrocution and all the other problems associated with flooding.”

Another problem trying to be solved at the exhibition was waste. In Burundi in East Africa, leftover banana crops are being turned into reusable bags. The solution is fighting pollution and climate change through a circular economy; adding value to banana plantations whilst creating jobs for unemployed youth.

Jolis Nduwimana, Founder of Warrior Eco-Green Enterprise (Wege) says, “90% of the Burundi population deals with agriculture. After harvesting, you find there are so many wastes in the banana farm and then we collect them. We are also collaborating with many cooperatives that grow bananas. We are also collaborating with more than 86 banana farmers that grow bananas. Then we collect them from them and buy them just by giving a small amount of money and then transform them into this eco-friendly bag.”

Many of the creators at Prototypes For Humanity had their eyes on the prize, but there could only be four winners - each getting 24,000 Euros to help towards the development of their idea.

Tadeu Baldani Caravieri, Director, of Prototypes for Humanity says: “The idea of the prize is to award academic excellence. We are looking for solutions that are using technology in an innovative way. It can also be scalable to other communities and the planet. So, we encourage people to come and discover amazing innovations from over 45 countries. And also, of course, investors, private and public entities that want to engage with them.”