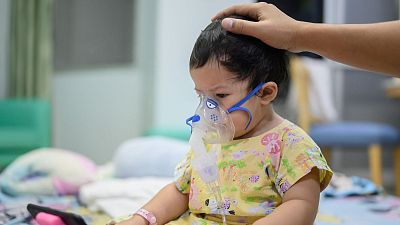 RSV is the virus that causes bronchiolitis, cases of which have lately been overwhelming paediatric units across the United States and France.   -   Copyright  Canva   -
By Euronews  with AFP & Reuters  •  Updated: 04/11/2022

The European Commission has just approved a new treatment for the prevention of a common and highly contagious virus that causes bronchiolitis in babies and has lately been putting hospitals under pressure in several countries.

Britain's AstraZeneca and France's Sanofi said on Friday their newly-approved drug nirsevimab, marketed as Beyfortus, is the first treatment to prevent severe illness caused by the respiratory syncytial virus (RSV) in infants.

RSV infects nearly all children by the age of two, the companies said. It is the most common cause of bronchiolitis, a respiratory infection that can make infants seriously ill and require their hospitalisation.

Beyfortus, given by a single injection, had been recommended for approval by the European Medicines Agency in September. In the United States, the product is still under regulatory review as a potential breakthrough therapy.

It's not technically a vaccine, but a monoclonal antibody treatment, which directly gives the body the ammunition to fight against the disease. A vaccine, on the other hand, triggers our immune system to produce its own antibodies.

Not in time for this winter

The news is welcome in France, which has seen hospitalisations for the disease soar in recent weeks. Paediatric units across the United States are also seeing a dramatic surge in cases.

But the newly approved drug will not be distributed quickly enough to make a real difference this winter across the Northern Hemisphere.

"Beyfortus will be available for the next season - 2023 - of bronchiolitis," Sanofi told AFP.

RSV causes thousands of hospitalisations and deaths globally each year in toddlers and the elderly, but the complex molecular structure of the virus and safety concerns have stymied efforts to develop a vaccine since the virus was first discovered in 1956.

Another preventative treatment already exists. Called Synagis, it's also produced by AstraZeneca, but it is only advised for premature babies or those who are considered at risk, and it requires up to five injections to cover a typical RSV season.

Earlier this week, US pharma giant Pfizer said its experimental RSV vaccine, when given to expectant mothers, was nearly 82 per cent effective at preventing serious illness from the virus in the first three months of their baby's life.