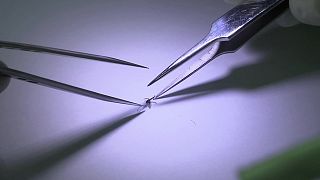 UK researchers say they have successfully manipulated the DNA of mosquitoes to stop them from transmitting malaria.   -   Copyright  AP Photo
By Roselyne Min  with AP  •  Updated: 29/09/2022

Scientists say they have managed to genetically modify mosquitoes so that they are unable to spread malaria, a disease that kills well over half a million people each year.

The changes cause mosquitoes to live shorter lives, while the parasites inside them, which cause the fatal infection, develop more slowly.

This slashes the chances of mosquitoes living long enough to carry fully grown parasites – and transmit the disease to the humans they bite.

Malaria is spread by the parasite Plasmodium falciparum, which grows and reaches maturation inside the female Anopheles mosquito. The average mosquito survives on average seven to 10 days in the wild.

By prolonging the developmental time that the parasite needs inside the mosquito to become infectious, this 10 per cent becomes now much smaller.

"By prolonging the developmental time that the parasite needs inside the mosquito to become infectious, this 10 per cent becomes now much smaller".

"At the same time, we managed to cut the mosquito's life a bit short. So the two things combined together now can lead to blocking malaria transmission in the field," he added.

However, the fight against malaria is far from over.

In order for the mosquitoes with modified DNA to survive and propagate widely in nature, they need to defy natural selection.

"These modifications make them weaker because they live shorter. So they will be eliminated naturally by natural selection after a few generations... unless you combine it with what we call the 'gene drive,' which will take this modification and spread it quickly through the populations," Christophides said.

Gene drive is a type of genetic engineering which favours specific hereditary characteristics to increase the likelihood that these are quickly spread through the population and passed on to the next generation, according to the Proceedings of the National Academy of Sciences (PNAS).

The researchers believe that such a "gene drive" will allow all mosquitoes to eventually carry the same modification of their DNA within a few generations.

However, it raises questions about whether massively releasing GM mosquitoes is safe for people, animals, or the environment.