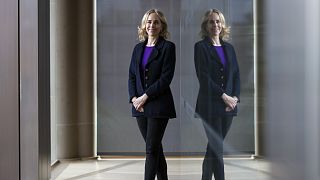 Alexandria "Zandy" Forbes' company, MeiraGTx, is working on gene therapy with a “switch” it says could revolutionise the treatment of diabetes and obesity.   -   Copyright  Courtesy MeiraGTx
By Natalie Huet  •  Updated: 28/09/2022

What if people who need regular injections to treat chronic diseases could instead take a pill that precisely controls the production of the right proteins and hormones inside their bodies?

A promising new gene therapy technology that aims to turn the human body into such a medicine-making factory could, if successful, push the boundaries of medicine and make certain treatments much more convenient and potentially less expensive.

MeiraGTx, a gene therapy company, is working to make this futuristic vision a reality.

The British company already develops “traditional” gene therapy, which replaces missing or broken genes in people with inherited disorders. That side of business is booming, and the firm just opened a manufacturing facility in Ireland that could employ up to 300 people.

But MeiraGTx is also making strides in what it calls gene “regulation” therapy, which it says could help control much more precisely the genes that instruct cells to make – or stop making – certain proteins.

It’s no easy feat and the technology would take years to bring to market, but it has the potential to make gene therapy even more life-changing for patients.

“When you put a gene or replace a missing gene into a cell today, you put the gene in and it is expressed for the rest of that cell's life,” MeiraGTx CEO Alexandria Forbes told Euronews Next.

MeiraGTx says it has developed a switch of this sort that could help make patients’ lives much easier: rather than injecting synthetic hormones and proteins into them, it could insert the gene that tells their body to make those, while a pill activates the gene only when the specific protein or hormone is needed.

Making the body make the drug

Take Epogen (epoetin alfa) – a well-known injectable drug that helps create more red blood cells when you're anaemic, with kidney disease or you're being treated for cancer.

“What you can do, for example, is put the gene for Epogen into the body, into the muscle, and have a switching system that only allows your body to make the natural form of Epogen when you take a pill,” Forbes explained.

“So we don't have to make unnatural forms of these drugs – because what we're doing is we're providing the body with the message to make the drug, and that message is only switched on when we give the body a pill”.

MeiraGTx told Euronews Next it has already tested this technology in animals and is hoping to start trialling it on humans in 2023.

If successful, it could have “huge, broad-ranging implications,” Forbes said.

“This isn't only for gene therapy. It allows you to control cell therapy, immuno-oncology, antibody production – anything that is a protein or peptide that can be made by the body”.

Many traditional drugs involve making a protein outside the body, like insulin to fight diabetes or antibodies to fight cancer. That protein is manufactured in cells or bacteria outside the body and then is injected into the body on a regular basis as a treatment.

Gene therapies are typically used against inherited diseases, where a gene is missing or not functioning well. Gene therapy inserts into a patient a perfect copy of that gene to replace the missing or “broken” one.

“So our drugs are actually genes - DNA - and they're delivered into the body by being encapsulated in viral proteins which act like a little spaceship and insert those genes that we've made into the appropriate cell,” Forbes said.

This type of technology requires a very specific manufacturing process to ensure through rigorous testing that every single batch of these genes always has the same identical quality, safety and potency, she explained.

MeiraGTx controls this manufacturing in-house and has just inaugurated a new commercial-scale facility in Shannon, Ireland, that’s set to employ 100 people initially and up to 300 as business grows.

Fighting obesity with a pill?

The company hopes the new site will help accelerate its development and delivery of gene therapy treatments to patients with an initial focus on rare inherited disorders affecting the eye, central nervous system, and salivary gland.

But MeiraGTx argues that adding a switch to be able to fine-tune gene therapy has the potential to considerably expand this range to also tackle non-hereditary diseases that affect hundreds of millions of people worldwide, including heart disease, cancer and diabetes.

It says it could even help fight obesity, arguably one of the biggest global health challenges.

The causes behind obesity are complex and multi-faceted, genetic factors mean some people are more at risk than others, and the hormones that control appetite are very unstable and short-lasting.

A class of injectable diabetes drugs currently proving highly effective against obesity are GLP- 1 drugs, which help control blood sugar levels. But they work better in combination with several other gut peptides that affect metabolism.

The challenge, once again, is to precisely control the levels of these peptides.

MeiraGTx claims its technology may someday allow those hoping to lose weight to “switch on” the combination of genes that produce the hormones and peptides controlling their appetite, blood sugar levels and ultimately their fat.

“We can now put the genes for three natural gut peptides that control metabolism into the body and give a pill when we want those drugs,” Forbes said.

In theory, if clinical trials go well, the potential applications for other diseases are dizzying – and they directly raise the question of extending human life expectancy. But that should not be the priority right now, Forbes said.

“I think that currently we have really big problems with obesity, with Alzheimer's, with ways of living that mean we are young and living poorly,” she said.

“And these sorts of products can be used to help address those really large indications, not just the rare gene replacements”.

Doppelgängers may share the same behaviours, as well as the same faces