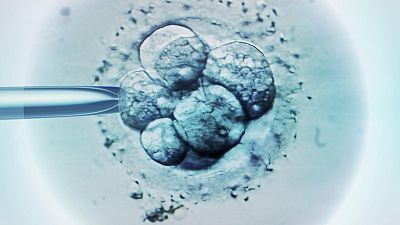 IVF embryos are increasingly frozen for a few months – or years – before being thawed and implanted for pregnancy.   -   Copyright  Canva
By Natalie Huet  •  Updated: 01/09/2022

While the absolute number of children who actually had cancer was low, the researchers say their findings should prompt fertility clinics to veer away from a “freeze-all” approach until more is known about how freezing and thawing embryos can affect the health of future generations.

It’s estimated that nearly one in 12 children in Europe are currently born after fertility treatments, including in vitro fertilisation (IVF).

This type of assisted reproductive technology (ART) allows embryos to be created from a human egg and sperm in a laboratory, and, as early as three days later, to be transferred to the patient’s uterus.

But more and more often, IVF embryos are frozen for a few months – or years – before being thawed and implanted for pregnancy.

For their study, published in the open-access journal PLOS Medicine, researchers at the University of Gothenburg in Sweden analysed medical data from nearly 8 million children in Denmark, Finland, Norway, and Sweden.

Of those, more than 170,000 were born after the use of ART, including 22,630 born after frozen-thawed embryo transfer.

"It is in fact quite modest, this increase. And that’s quite reassuring for parents: Most children are healthy," Christina Bergh, a professor of obstetrics and gynaecology at the University of Gothenburg and a co-author of the study, told Euronews Next.

Why does this matter?

Previous research suggests babies born after frozen embryo transfers are also at increased risk of macrosomia – or birth weight exceeding 4 kg – which itself has been associated with a higher risk of childhood cancer.

However, studies on any direct link between the practice of freezing embryos and the risk of childhood cancer have shown conflicting results.

The researchers say this could be due in part to the limited size of such studies – as few children actually develop cancer – as well as differences in cancer registration practices across countries.

They argue that the main strength of their new study is its large sample size, looking at populations born during a period of up to three decades across four Nordic countries known for their high-quality health registries.

However, the authors caution that their new study cannot definitively link frozen embryo transfers with an increased risk of cancer in childhood. They note that the data is observational and other factors such as genetics, parental preconception health, and lifestyle cannot be excluded.

They took into account possible variables such as embryo stage, maternal age, birth order, gender, birth weight, and whether the babies were singletons or multiples.

When analysed as a single group (including those born after frozen-thawed transfer and fresh embryo transfer), however, the use of any type of ART did not show an increased risk of cancer.

The most common types of cancer found in this study were leukemia and tumours of the central nervous system.

"The reason for a possible higher risk of cancer in children born after FET [frozen-thawed embryo transfer] is not known," the study reads.

The researchers emphasise that their findings should be interpreted with caution, since although the study was large, the number of children born after frozen-thawed embryo transfer who later developed cancer was low (48 cases), which could limit the statistical strength of the analysis.

Still, the findings may raise concerns about frozen-thawed embryo transfer, and the team says future research is needed to confirm a possible link between the procedure and increased risk of cancer, as well as any biological mechanisms that may underlie such a risk.

What might cause a higher cancer risk in ‘cryo-babies’?

There are three hypotheses, Bergh told Euronews Next.

It could be that the freezing procedure itself has an impact on the risk of cancer.

It could be an endometrial factor; something to do with the fact that the lining of the uterus of women who receive a frozen embryo is generally much less stimulated by fertility treatments than those who receive a fresh embryo transfer.

Those who have an embryo transferred only days after egg retrieval and IVF have indeed typically just been given a weeks-long hormonal regimen to boost the number of eggs they can produce – and maximise their chances of getting at least one fertilised.

Or it could have to do with the fact that embryos that survive both the freezing and thawing process are the fittest for survival and "have more growth factors," which could also explain higher birth weights, said Bergh.

"There could be a connection with hormones and growth factors that cause overgrowth," she said. "Because cancer is a kind of overgrowth of certain cells, so there are some similarities between cancer and overgrowth".

She said the findings should not cause alarm among parents but should spark soul-searching within fertility clinics that prefer the "convenience" of frozen embryo transfers – as these can be scheduled outside of weekends and holidays.

"Our message is you should freeze (embryos) for medical reasons, not for other reasons," said Bergh. Cases where patients are hyperstimulated after an IVF procedure are a valid reason to delay a transfer, she said.

"Our study shows there seems to be a higher risk for cancer in cryo-babies but not in babies from fresh embryo transfers. And you should be a bit more careful about freeze-all approaches".

These workers tried 'quiet quitting' and have never looked back

Scientists discover first substance that has memory like human brains