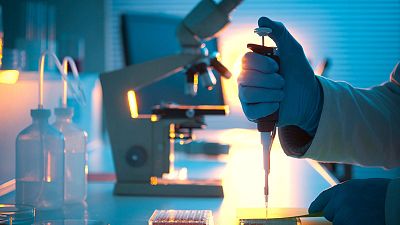 While the threat of COVID-19 still lingers two years on from the start of the pandemic and the outbreak of monkeypox is far from being contained, a new virus is looming over the horizon.

Researchers are monitoring the spread of the novel Langya henipavirus (LayV) in China, where dozens of cases have already been reported.

The virus was first detected in 2018 in the northeastern provinces of Shandong and Henan but was only officially identified last week after China experienced a sudden surge in cases, now up to a total of 35.

According to a study by ​​the Beijing Institute of Microbiology and Epidemiology published last week, the Langya virus cases were identified after several patients experiencing a fever and reporting a history of animal exposure in eastern China were examined by health officials as part of a health surveillance project.

After identifying the Langya virus in one of the patient’s throat swabs, the researchers found the presence of the virus in 35 people - mostly farmers - in the Shandong and Henan provinces.

What is the Langya virus?

The Langya virus belongs to the same family as the deadly Nipah and Hendra viruses, the henipavirus family.

According to the World Health Organization (WHO), this family of viruses is highly dangerous, with Nipah being estimated to have a fatality rate between 40 to 75 per cent - much higher than the death rate reported for COVID-19.

It’s unclear how dangerous the Langya virus could be to humanity, as all the patients who contracted the virus in China so far experienced mild flu-like symptoms, and there were no related fatalities reported.

The henipavirus viruses are naturally harboured by pteropid fruit bats (flying foxes) and microbats of several species, according to a Chinese study from 2008, but other studies have found other henipaviruses in bats, rodents, and shrews.

What are its symptoms of Langya virus?

The most common symptom of the Langya virus appears to be a fever (experienced by all patients), but those infected with the virus also reported fatigue (54 per cent of patients), loss of appetite (50 per cent), muscle pain (46 per cent), cough (50 per cent), nausea (38 per cent), headache and vomiting (35 per cent) after contracting the virus.

Several also developed blood cell abnormalities and signs of liver and kidney damage, but none of the infected patients died.

How does Langya virus get transmitted?

The Langya virus is a zoonotic infection - meaning the virus is spread from animals to humans. But as none of the patients in China had close contact with each other, experts believe that the transmission of the virus from animal to human is still sporadic.

Researchers in China are still trying to find exactly what animals were involved in the virus transmission, but they suspect shrews might be involved.

Scientists at the Beijing Institute of Microbiology and Epidemiology found that among 25 species of wild small animals surveyed, the genome of the virus was predominantly detected in shrews, with 27 per cent of 262 shrews examined found to be harbouring the virus.

This could potentially mean that the tiny animal may be a natural reservoir of the Langya virus.

While it’s certain that the virus was transmitted from an animal to a human, researchers are still unsure about whether human-to-human transmission is possible at all.

According to the Chinese scientists, contact tracing of 9 patients with 15 close-contact family members revealed no transmission of the virus. But the same researchers believe the sample analysed is too small to determine whether human-to-human transmission is possible.

How is Langya virus treated?

There are currently no vaccines for humans for henipaviruses, though one against Hendra virus exists for horses.