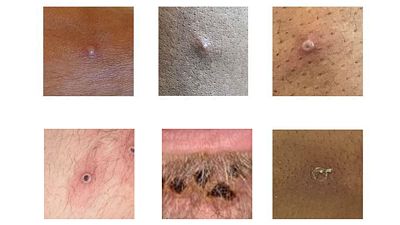 Scientists are warning that this outbreak of monkeypox is different from past ones, with symptoms that could lead to mistaking the virus for an STD.   -   Copyright  Image via UKHSA   -
By Jack Ramage  •  Updated: 08/07/2022

As monkeypox cases rise across the globe, experts warn even more infections could be flying under the radar as symptoms differ from what doctors have seen in the past.

As of July 6, more than 6,000 cases of monkeypox have been reported from 58 countries – according to data released by the World Health Organization (WHO). Most cases are currently recorded in Europe, with the virus spreading in non-endemic countries, most of which had never seen monkeypox cases before.

The current outbreak has led the UN agency to reconvene and advise on declaring the outbreak a global health emergency – the highest level of alert by the WHO – in the week starting July 18, or sooner.

The WHO has warned that many cases are presenting the previously typical clinical picture for monkeypox, with some cases showing very limited or no visible skin lesions.

A new study in the Lancet Infectious Diseases journal suggests that, compared to past outbreaks of monkeypox, symptoms like fatigue and fever are now also less common, whereas genital lesions are more likely.

This is the first study to look at symptoms among UK cases in the current outbreak and suggests the important role sexual activity plays in transmission – particularly among men who have sex with men.

How are monkeypox symptoms changing?

According to the study – which assessed 54 individuals who had attended sexual health clinics in London and were diagnosed with monkeypox during a 12-day period in May 2022 – monkeypox symptoms were milder and more localised than in the past.

Interestingly, 18 per cent of patients in the study did not report having any symptoms at all before developing a rash, which is different to how we have seen monkeypox play out in the past.

Experts say these atypical symptoms are being seen in monkeypox patients around the world and could lead the virus to either go undetected or be mistaken for a sexually transmitted disease (STD).

“In previous outbreaks, people typically had prodromal symptoms – symptoms that would show up before the traditional rash,” said Elizabeth Finley, director of communications for the National Coalition of STD Directors in the United States.

“People in the past would experience malaise or headaches, body aches, and things of that nature before the rash would show up,” she told Euronews Next.

“What we've seen in this outbreak is people tend to have the rash or lesions show up first, and then other symptoms. Maybe they’ll see a sore, a pimple or a rash – and then a few days later headaches, body aches or tiredness”.

These findings chime with WHO Europe’s report dated July 6, which states that cases associated with this outbreak have been “atypical” with many of them inconsistent “with the classically described clinical picture of monkeypox” – namely “fever, swollen lymph nodes, followed by a centrifugal rash”.

WHO officials have called for more accurate monitoring of the virus to better understand its symptoms and transmission.

“We still have to look and see how much is the virus actually evolving and how much of that apparent evolution is because we just have not been looking and monitoring it hard enough,” Dr Michael Ryan, Executive Director of the WHO Health Emergencies Programme, said in a press conference on Wednesday.

“It’s a little bit like the man looking for his keys under the lamppost – we’re looking where the light is but we're not looking in the dark… That’s the problem”.

“The more we can expand the ability to do real-time genetic sequencing across the African continent, the more we can keep an eye on these viruses,” he added.

It’s a little bit like the man looking for his keys under the lamppost – we’re looking where the light is but we're not looking in the dark… That’s the problem.

“It’s important that sexual health clinicians and patients are aware of the symptoms of monkeypox as misdiagnosis of the infection may prevent the opportunity for appropriate intervention and prevention of onward transmission,” she said.

How to tell monkeypox from other STIs

“Monkeypox is a novel diagnosis within the sexual health setting and our study, the first to publish on cases from this UK outbreak, will support future case finding and clinical care,” Dr Nicolo Girometti, from the Chelsea & Westminster Hospital NHS Foundation Trust, said in a statement released with the UK study.

“Currently, the UK and several other countries are seeing a rapid increase in monkeypox cases among individuals attending sexual health clinics”.

The change in monkeypox symptoms and the attention the virus has been getting in the media may end up helping to better track cases of other sexually transmitted diseases.

“What we have seen is that there are a number of people who have symptoms of monkeypox learn that they either have something else, like syphilis or herpes – or that they have monkeypox and something else,” said Finley, of the US National Coalition of STD Directors.

Testing yourself for monkeypox at a public healthcare centre or sexual health clinic is “truly the only way to know whether you have monkeypox or something else,” she added.

“It's very important to go to a clinic to have those tests,” she stressed, urging people concerned they may have monkeypox symptoms to also get tested for other sexually transmitted infections (STIs).

“What we don't want to see is for somebody to go in and be tested for monkeypox, but not other sexually transmitted infections, and then not get treatment for those”.