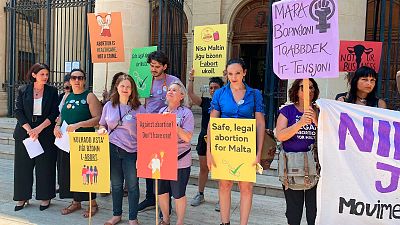 A group of 135 doctors in Malta have signed a legal protest calling for a review of the country’s blanket ban on abortion and demanding "empathy" following the ordeal of an American tourist who suffered an incomplete miscarriage while visiting the country.

Andrea Prudente, who was 16 weeks pregnant, was reportedly denied a request to terminate her non-viable pregnancy because of Malta’s strict abortion ban, even though she was at risk of infection or heavy bleeding.

Late on Thursday, her private insurance organised her medical evacuation to Spain where she was being treated.

Gynaecologist Isabel Stabile, who filed the protest in court on behalf of the 135 doctors, says this medical scenario happens to two to three women each year in Malta.

"Most women living here do not have private insurance to help them evacuate to get their much-needed treatment abroad. Our laws are neglecting these women, risking their lives needlessly," Stabile said in a statement.

Our responsibility towards our patients demands that we try to treat conditions before they become unstable and life-threatening.

The Mediterranean island nation is one of the few Western states that has a total ban on abortion, after the republic of San Marino decriminalised the procedure last year and other overwhelmingly Catholic countries such as Ireland and Italy legalised it.

In a similar case to Prudente's, a Canadian woman had to be flown out of Malta in 2014 to terminate an unviable pregnancy, according to the Times of Malta.

The legal protest filed on Monday argues that Malta’s laws put doctors in an impossible position.

"This criminalisation is also prohibiting the doctors from attending to the necessary care in cases where complications may arise in a pregnancy and therefore cannot adhere to international standards," it reads.

"Doctors in Malta refuse to accept this legal situation," Stabile said on behalf of the signatories, adding that the main sentiment driving the protest was "empathy".

"Our responsibility towards our patients demands that we try to treat conditions before they become unstable and life-threatening,” the statement read.

“In cases of complicated pregnancy, abortion may be required to protect a woman’s physical and mental health".

'Carte blanche on abortion' or standard right to care?

Malta’s criminal code stipulates that whoever causes a miscarriage can be liable to 18 months to three years in prison.

Women who bring about their own miscarriage or consent to one face the same penalties.

According to article 243 of that code, doctors or pharmacists who “knowingly prescribe or administer the means whereby the miscarriage is procured” risk a jail term of 18 months to four years and can be banned from practising their profession for the rest of their lives.

The signatories argue that Malta’s strict abortion ban is tantamount to a breach of fundamental human rights of women” and violates a number of international treaties such as the European Charter of Human Rights and the Universal Declaration of Human Rights.

They are demanding that Malta’s laws be changed so that medical professionals are no longer criminalised for helping to terminate a pregnancy.

They are also calling for new rules allowing medical professionals to provide immediate care in cases where complications in pregnancy arise.

Doctors for Life Malta, an anti-abortion group, criticised the legal filing, saying it amounted to a request that "doctors be given carte blanche on abortion".

It said removing article 243 from the law would allow "any doctor or practitioner to perform any kind of abortion for any reason".

Malta has been criticised by the Council of Europe’s human rights commissioner, Dunja Mijatović, over its abortion policy.

In a report in February, Mijatović said that "unimpeded access to sexual and reproductive healthcare" is critical to preserving a woman’s right to health and her right to be free from discrimination.

"Malta’s blanket ban on abortions puts these rights at significant risk," she said.

She "strongly urged" Maltese authorities to repeal provisions criminalising abortion and to develop women’s access to legal and safe abortion.