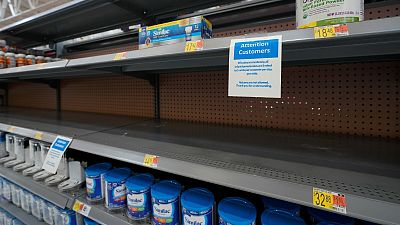 A shortage of baby formula in the United States has become so serious that supplies are being airlifted from Europe and President Joe Biden has invoked decades-old wartime powers to speed production.

The crisis has left desperate parents frantically searching for infant formula, which is the only recommended source of nutrition for millions of babies across the country who aren’t breastfed.

Supplies of baby formula across the US have been severely curtailed in recent weeks after a safety recall by Abbott Nutrition worsened supply chain disruptions across the industry.

The crisis has left pharmacy and supermarket shelves increasingly bare and parents struggling to find formula for their babies, with many hunting for solutions online.

The Biden administration is now taking drastic measures, invoking the 1950 Defence Production Act to force suppliers to fulfil orders from formula manufacturers before other customers to help ramp up production as quickly as possible.

Biden is also authorising the Defense Department to use commercial aircraft to airlift formula supplies that meet federal standards from overseas to the US, in what the White House is calling “Operation Fly Formula”.

Earlier this week, the Food and Drug Administration (FDA) said it was streamlining its review process to make it easier for foreign manufacturers to begin shipping more formula into the US.

Abbott and its Swiss rival Nestlé have already been shipping cans of baby formula from their plants in Europe to the US to help alleviate the shortage.

Why is there a shortage?

The problems began last year as the COVID-19 pandemic led to disruptions in labour, transportation and raw materials - economy-wide issues that didn’t spare the formula industry.

Inventory was further squeezed by parents’ panic-buying and stockpiling during coronavirus lockdowns.

Then in February, Abbott Nutrition recalled several major brands of powdered formula and shut down its biggest manufacturing plant, when federal officials began investigating four babies who suffered bacterial infections after consuming formula from the facility.

Abbott is one of only a handful of companies that produce the vast majority of the US formula supply, so their recall wiped out a large segment of the market.

Regulators said on Monday that they’d reached a deal to allow Abbott Nutrition to restart its Sturgis, Michigan factory, the nation's largest formula plant. The company must overhaul its safety protocols and procedures before resuming production.

After getting the FDA’s OK, Abbott said it will take eight to 10 weeks before new products begin arriving in stores. The company didn’t set a timeline to restart manufacturing.

What are companies doing?

A spokesperson for Abbott told Euronews Next the company was "working to get as much product into the hands of parents" as possible and that it had already shipped millions of cans of formula powder into the US from its FDA-registered facility in Cootehill, Ireland.

Food giant Nestlé is now also shipping formula into the US by plane.

In a statement to Euronews Next, Nestlé said it was shipping some specialty products made at FDA-registered factories outside the US, including Gerber Good Start Extensive HA from the Netherlands and Alfamino from Switzerland.

It said those products “serve a critical medical purpose” for babies with cow’s milk protein allergies, who can tolerate few formula options.

"We welcome the recent efforts by the US FDA to give companies temporary flexibility with regard to the import of certain infant formulas and are assessing where else we may be able to tap into the Nestlé global nutrition network to help in a responsible way," the company said.

Don’t 'make your own formula'

While authorities and companies work to bring more formula to store shelves across the US, health officials have warned families against buying cans through social media websites or outside of conventional retailers because they could be counterfeit.

They have also advised against trusting make-your-own formula recipes online, which may be difficult for young babies to digest and lack the specific vitamins and proteins found in formulas approved by the FDA.

Most formulas contain protein from cow’s milk that’s been altered to be easier to digest and enhanced with extra nutrients needed for growth and development.

The FDA sets specific nutritional requirements, including minimum amounts of protein, fat, calcium, and a number of vitamins. Formula makers achieve those levels by adding various sugars, oils, and minerals.

Formulas are designed to mimic breast milk, though studies have repeatedly shown better health outcomes for babies who are breastfed.

The US baby formula shortage has sparked a surge of interest at milk banks around the US, with some mothers offering to donate breast milk and parents anxiously asking if it’s a solution to get their babies fed.

But the country's nonprofit milk banks, which collect milk from mothers and process it, including through pasteurisation, prioritise feeding medically fragile infants and work with hospitals to distribute it.

The World Health Organization (WHO) recommends exclusively breastfeeding babies until they are six months old. But US figures show only a quarter of babies are fed solely breast milk at that age.

Mothers face a number of challenges to long-term breastfeeding, including returning to work and finding the time and equipment needed to pump breast milk.

About 60 per cent of mothers stop breastfeeding sooner than they had planned, according to the Centers for Disease Control and Prevention (CDC).