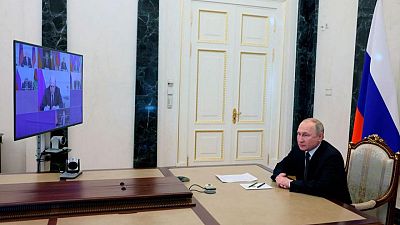 LONDON – A package of sanctions imposed on Russia, its top companies and its business and political elite over Moscow’s invasion of Ukraine look set to trigger a deep recession in Russia.

Here is a summary of the economic consequences and Russia’s retaliatory measures:

Almost 1,000 Western companies have either left or scaled back their operations since the start of the conflict, according to the Yale School of Management.

The government forecasts that the economy will shrink 8.8% this year, and not return to its pre-invasion size before 2026. Some independent forecasters expect a double-digit contraction.

Shortly after the invasion, the central bank hiked rates from 9.5% to 20% to shore up the rouble and contain soaring inflation, which peaked at 2.22% a week in early March. Annual inflation in early May was still almost 18%.

Tight capital controls and a requirement that exporters convert at least 80% of foreign currency earnings lifted the rouble back to multi-year highs against both dollar and euro in early May, with the benchmark interest rate lowered to 14%.

On May 13, Moscow’s RTS index of rouble-denominated shares was down around 9% since the day before the invasion, while the rouble-based MOEX was down 24%. The FTSEurofirst 300 index of leading European shares was down 5%.

On March 31, President Vladimir Putin required companies based in “unfriendly countries” – those that had imposed sanctions on Russia – to pay for their energy in roubles rather than the dollars or euros stipulated in their contracts.

The European Union has said this would involve conducting transactions with the Russian central bank for the currency conversion – which is banned under EU sanctions.

Amid resistance from European clients and lack of clarity over how to make payments, Russia cut off Poland and Bulgaria for refusing to pay in roubles.

On May 3, Putin outlined new measures against a list of individuals and companies from “unfriendly countries”.

Russian businesses and individuals would be banned from doing any business with those on the list, even if they were fulfilling existing contracts and obligations.

The list, published on May 11, comprised the former German unit of the Russian gas producer Gazprom and its subsidiaries servicing gas consumption around Europe, as well as the owner of the Polish section of the Yamal-Europe gas pipeline.

On May 12, Gazprom said it would cease exporting gas to European countries through the pipeline – which Germany said would result in a 3% overall fall in Russian gas deliveries.

Loan repayments from Russian companies to foreign investors may only be made in roubles to a special Russian bank account.

Russia’s central bank and finance ministry may issue waivers to those directives, however.

The Kremlin has ordered Russian-listed public companies to delist depositary receipts – an instrument that represents shares – from foreign trading platforms, unless they are exempted.

Several Russian companies used depositary receipts traded in London and New York to tap into foreign investment. The law does not affect firms whose primary listing is abroad, such as Yandex or TCS Group.

Under a decree passed in May, Moscow allowed firms to import Western-made proprietary products – such as cars and smartphones – without the permission of the manufacturer, and resell them in Russia. The move was intended to maintain Russian consumers’ access to Western brands.

Russia has closed its airspace to European and U.S. airlines, forcing some long-haul flights to Asia to take longer routes.

Russia has said it will not return more than 400 aircraft leased from Western companies that were based in Russia, effectively seizing almost $10 billion worth of planes.

Russia has also sanctioned a host of Western politicians, including legislators and ministers in the United States, the EU, Britain, Canada and other countries, as well as other officials and journalists, in response to similar moves by those countries.