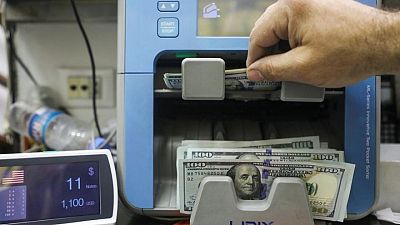 NEWYORK – The dollar climbed to a fresh 20-year high on Thursday as concerns persisted that central bank actions to drive down high inflation would crimp global economic growth, boosting the currency’s safe-haven appeal.

Data from the Labor Department showed weekly initial jobless claims rose to their highest level in three months, although the labor market remains a strength of the U.S. economy. On the inflation front, the producer price index showed a sharp deceleration in April to a 0.5% rise from the 1.6% surge the prior month, thanks in part to a sharp drop in energy products.

“PPI slightly mixed to slightly less than expected today but overall there is still a lot to worry about… if S&P sells off again that is going to be broadly supportive of dollars,” said Erik Bregar Director, FX & Precious Metals Risk Management at Silver Gold Bull Inc in Toronto.

After the Fed raised its benchmark overnight interest rate by 50 basis points last week, the largest hike in 22 years, investors have been attempting to assess how aggressive the central bank policy path will be. Expectations are completely priced in for another hike of at least 50 basis points at the central bank’s June meeting, according to CME‘s FedWatch Tool https://www.cmegroup.com/trading/interest-rates/countdown-to-fomc.html?redirect=/trading/interest-rates/fed-funds.html.

Irish Central Bank Governor Gabriel Makhlouf joined a chorus of European Central Bank policymakers calling for the Governing Council to act to tackle inflation, though not necessarily at the same pace as the Fed.

Risk assets have been under pressure for most of the year, with the S&P 500 on the verge of confirming it is in a bear market, commonly viewed as a decline of 20% from its record high.

Investors have gravitated towards safe-haven assets such as the dollar as worries have mounted about the Fed’s ability to tamp down inflation without causing a recession, as well as repercussions from the war in Ukraine and rising COVID-19 cases in China sapping demand. Concern about a lingering stagflation environment of slow growth and high prices have also dented the appetite for risk.

U.S. Treasury Secretary Janet Yellen told a U.S. House of Representatives Financial Services Committee hearing the Fed can bring down inflation without causing a recession because of a strong U.S. job market and household balance sheets, low debt costs and a strong banking sector. Fed Chair Jerome Powell was also confirmed by the U.S. Senate for a second term.

“(The Fed) have a big, big credibility problem, they have always had one but it’s worse now. The inflation genie is out of the bottle and nothing else matters now,” said Bregar.

Another safe-haven, the Japanese yen, strengthened 1.47% versus the greenback at 128.08 per dollar, while Sterling was last trading at $1.2173, down 0.63% on the day after a flurry of soft economic data in Britain.