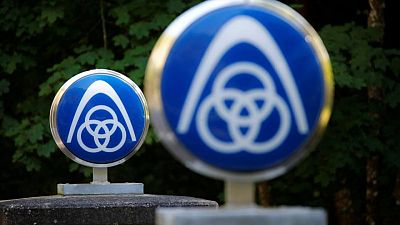 FRANKFURT -Shares in Thyssenkrupp gained the most in 18 months after the German car parts-to-submarines conglomerate raised its outlook for sales and operating profit in 2022, reflecting a strong recovery rise in selling prices of steel and materials.

Adjusted earnings before interest and tax (EBIT) are now forecast to grow to at least 2 billion euros ($2.1 billion), the group said. It previously expected adjusted EBIT of 1.5 billion to 1.8 billion euros.

“We showed resilience and improved our earnings significantly,” Chief Executive Martina Merz said in a statement. “The considerable increases in market prices at Materials Services and Steel Europe are contributing significantly to this development.”

Shares in the company, which still aims to list its hydrogen division Nucera in the first half, rose as much as 13.4%, their highest daily gain since November 2020.

While high prices helped it on the product side, they proved a bane for procurement costs, causing Thyssenkrupp to cut its outlook for free cash flow before mergers and acquisitions, now expected to be negative in the mid triple-digit million euro range.

It had previously guided for break-even in 2022.

“The dynamic movements in commodity and materials prices are weighing on our cash flow at present. However, we expect that there will be sequential improvements for us in the subsequent quarters,” Chief Financial Officer Klaus Keysberg said.

The group said it aims to return to paying dividends and generate positive cash flows, adding Russia’s invasion of Ukraine made “it more difficult to predict when precisely we will achieve these goals”.

In the second quarter, adjusted EBIT nearly quadrupled to 802 million euros, while sales increased by nearly a quarter to 10.6 billion as order intake jumped 57%.