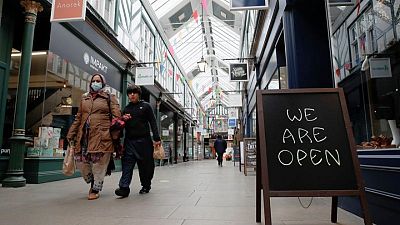 LONDON – British shoppers, feeling the hit from surging inflation, cut their spending for the first time since early 2021 when the country was under a coronavirus lockdown, according to a survey published on Tuesday.

The British Retail Consortium (BRC) said total retail spending among its members – mostly large chains and supermarkets – was 0.3% lower than a year earlier, compared with 3.1% annual growth in March.

The annual fall in spending was the first since January 2021. The figures are not adjusted for inflation, so the fall in the volume of goods purchased will have been much greater than the drop in money spent.

A 13% leap in global food prices between March and April, pushed up by the war in Ukraine, spelt more trouble ahead for retailers who would be unable to absorb all the extra costs, Dickinson said.

Britain’s consumer prices rose by 7.0% in the 12 months to March – a 30-year high – and the Bank of England said last week that inflation was likely to peak at more than 10% later this year, causing a sharp economic slowdown or possibly a recession.

An increase in payroll taxes for both employers and workers also took effect in April.

The BRC said its ‘like-for-like’ retail sales measure, covering only outlets open in April 2021, when non-essential shops were shut for part of the month, showed a 1.7% annual fall in spending after a 0.4% contraction in March.

Spending on expensive items such as furniture and electrical goods was hit the hardest in April with delays in shipments from China adding to the problems for retailers.

But good weather helped sales of garden goods. Spending on clothing for events such as weddings, many of which had been delayed by the pandemic, also rose.

Separate data from payment processor Barclaycard, covering a broader range of spending, showed outlays on essential items grew by slightly less in April than in March as drivers cut back on fuel and shoppers sought to save money on groceries.

But average spending on utilities leapt by almost 30% compared with a year ago as household energy tariffs went up.

Overall spending by consumers grew 18.1% in April compared to the same period in 2019, reflecting the rising energy costs.

The travel sector had its best month since before the pandemic as people prepared to go on holiday again.

Nine in 10 people surveyed by Barclaycard expressed concern about the impact of rising household bills on their finances. But shoppers’ confidence in their ability to spend on non-essential items and to live within their means was stable.

Barclaycard said slower increases in spending on takeaway meals, nights out and subscriptions showed how consumers were changing their behaviour.