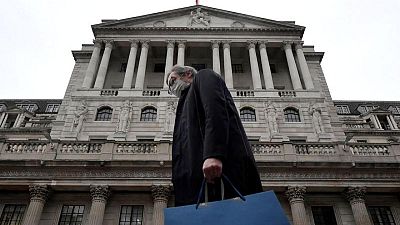 -Britain’s blue-chip index closed slightly higher on Thursday, supported by strong earnings from energy major Shell and a slump in sterling after the Bank of England (BoE) warned the UK economy was at risk of a recession.

The BoE sent a stark warning that Britain risked the double-whammy of a recession and inflation above 10% as it raised interest rates to their highest since 2009, hiking by quarter of a percentage point to 1%.

The central bank also slashed its GDP forecast for 2023 to show a contraction of 0.25% from a previous estimate of 1.25% growth.

“The market reaction clearly is not looking at the slightly less dovish split vote, while clearly putting more focus on those much higher inflation forecasts and also the somewhat surprising forecast of the UK economy contracting in 2023,” said Max Kettner, chief multi-asset strategist at HSBC, referring to a minority of BoE rate-setters calling for a larger rate rise.

“If we get closer to the point, with the Bank of England really over tightening to the degree that the UK economy is actually starting to look recessionary, the cyclical sectors in the FTSE 100 will be increasingly at risk.”

Rate-sensitive bank and insurance stocks dropped about 0.6% each as government bond yields fell.

On the other hand, shares of dollar earners such as Diageo and British American Tobacco were supported as sterling tumbled more than 2% against the dollar to its lowest since July 2020. [GBP/]

Shell jumped 3.1% after the oil major posted a record quarterly profit, underpinned by higher oil and gas prices and a strong performance of its trading division.

Reach slumped 20.9% after the news publisher flagged tepid advertiser demand, with the Ukraine conflict reducing the amount of content that brands want to be linked with.