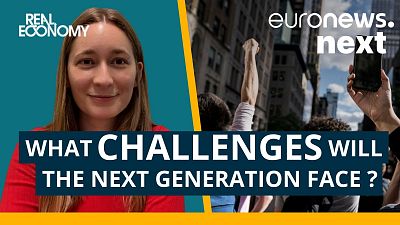 Kira Marie Peter-Hansen is a Danish politician and at just 24-years-old she is the youngest MEP to be elected to the European Parliament.   -   Copyright  Source: Euronews
By Marie Lecoq  & Guillaume Desjardins  •  Updated: 04/05/2022

Climate change, fear of war and the decline of democratic values in many countries are shaping tomorrow’s world.

And it’s the youth who will pay the biggest price of the decisions taken today. We spoke to Kira Marie Peter-Hansen, a Danish politician and at just 24-years-old she is the youngest MEP to be elected to the European Parliament, about the main challenges the next generation will have to face.

Climate change is one of the major issues that the world is facing and countries need to “step up” to ensure a green transition, Peter-Hansen said.

“If we want to have a liveable planet after 2030, really, we really need to do whatever it takes to ensure a green transition.”

To achieve this, European Union leaders should be investing in renewable energies, developing ecological agriculture and promoting a circular economy.

In 2020, the European Union approved a set of policies to make the bloc climate neutral by 2050. The European Green Deal hopes to boost the economy through green technology, create sustainable industry and transport, and cut pollution.

As an intermediate step towards climate neutrality, the EU has also committed to cutting emissions by at least 55 per cent by 2030 compared to 1990’s levels.

But can the EU achieve its green goals? Peter-Hansen says there is a lack of responsibility and political will to take concrete actions - and reaching the goals by 2030 will be very difficult.

“We have a young generation who are actively going to the streets, marching, fighting for a better future but aren't being heard by political leaders,” she said.

In recent years, there has been a lot of tension and pressure on democracy and Peter-Hansen says the EU has to protect and promote its core values.

“We see a backlash of democracies in a lot of countries. We have the Middle East and we have China and we have Russia who are not favouring a democratic and open society,” she said.

“It's important that we, as the EU, stand our ground as being a democratic organisation, a democratic continent and ensuring that we can also promote democracy in the rest of the world.”

“We need to have the respect of human rights and we need to ensure that all countries in the EU are based on the fundamentals of rule of law,” Peter-Hansen said.

The rule of law is one of the core principles of the EU - and is a prerequisite for the protection of all its other fundamental values such as human rights and democracy.

Under the rule of law, amongst other things, member states need to ensure that their judiciary is independent and impartial and that laws are fair and protect fundamental rights.

Currently, some member states have failed to comply with EU’s fundamental rights.

“We are facing in Europe, a Hungary and a Poland who are not really favouring the idea of rule of law, who are making LGBTI free zones, who are closing universities and who are firing judges,” Peter-Hansen said.

There needs to be a strong European response for countries who do not align with the EU's rights and values, she added.

“We cannot have a European Union where it's not possible to be transgendered or homosexual.”

On April 27, Brussels triggered its rule of law mechanism against Hungary for the very first time. The mechanism was approved by the European Court of Justice earlier this year following a challenge by Hungary and Poland.

As wealth inequality increases globally, there needs to be a fair tax system, said Peter-Hansen. This means fair wages, fair working conditions but also making sure that everyone pays a fair share of taxes.

“Making an end towards tax havens and money laundering is of key importance if we want to keep the respective democracies and the trust in the European Union,” she said.

The EU also needs to strengthen social security to ensure that no one is left behind during the digital and green transitions.

“It’s important that we make sure that if you are in the labour market and if you fall out of the market, you still have the possibility to get support,” she said.

To find out more, watch the video above.