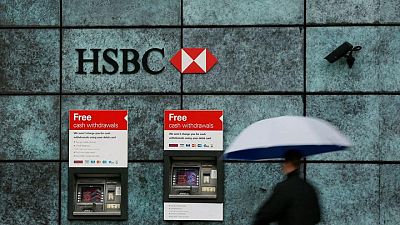 HONGKONG -HSBC investors gave a break-up proposal by its biggest shareholder a lukewarm response on Tuesday, voicing concerns a split would prove complex with no guarantee of raising returns.

Chinese insurance giant Ping An has called on HSBC to explore options including spinning off its Asian business, where it earns two-thirds of its pre-tax profits, sources familiar with the situation said on Friday.

HSBC‘s Hong Kong shares closed up 2.6%, while its London-listed shares were trading 2.3% higher at 1553 GMT. Both bourses were closed on Monday for a holiday.

A break-up would jeopardise earnings from HSBC‘s global banking franchise and distract bosses when they should be looking to cash in on rising rates, a large UK-based institutional investor, who declined to be named, told Reuters.

An Asian demerger could also lead to higher costs of capital in the longer-term, effectively wiping out any quick gains gleaned from new listings, other investors and analysts said.

“If an Asia spin-off were to happen we would regard it as negative,” said Filippo Alloatti, Head of Financials at Federated Hermes. “A less diversified, less profitable HSBC would almost be certainly downgraded by the rating agencies.”

HSBC shareholders have grappled with the idea of a break-up several times in recent years, as disappointing earnings from UK, European and U.S. businesses weighed on its share price and management’s promises of double-digit shareholder returns.

Noel Quinn, HSBC‘s CEO for the past two years, is ploughing billions of dollars into Asia to drive growth, with a focus on wealth management, and has moved global executives there.

But the timing of Ping An’s call, amid growing geopolitical tensions between the West and China, may encourage investors to consider more than just the financial forces at work.

HSBC has not commented on Ping An but defended its structure, saying in a statement that it believed it had the right strategy and was focused on delivery. [L2N2WR21M]

Ping An said on Saturday that it supports all reform proposals that could help with HSBC‘s long-term value growth.

HSBC‘s shares have shed 35% since Ping An first reported it owned a 5% stake in HSBC in late 2017. Refinitiv data showed the insurer owned an 8.23% stake in the British bank as of Feb. 11.

Financial break-ups, such as that pursued by Asia-focused, London-listed Prudential, have not generated much value for the parent, analysts at Jefferies pointed out.

“A spin-off may be logical but it needs to be balanced by the fact that a significant portion of that is the result of HSBC‘s global footprint bridging East and West,” Justin Tang, Asian research head at advisory firm United First Partners, said.

In 2016, HSBC decided to keep its headquarters in London, rejecting the option of shifting its centre of gravity back to Hong Kong after a 10-month review.

HSBC shelved plans last month for new stock buybacks this year after reporting an unexpected hit to its capital as a cocktail of rising inflation, geopolitical tension and economic weakness dented its earnings prospects. [L2N2WO06P]

The bank employs 220,000 staff and caters to around 40 million customers worldwide through a network covering 64 countries and territories.