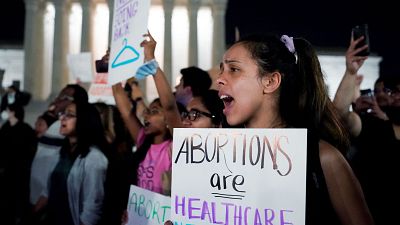 Amazon will pay the travel costs for staff who are forced to travel 100 miles (161km) or more to have an abortion, the company announced to staff on Monday.

In an internal email seen by Reuters, the e-commerce giant said it would reimburse up to $4,000 (€3,700) a year in cases where workers could not access non-emergency healthcare near their homes.

The announcement came hours before Politico reported a leaked draft opinion by the US Supreme Court which suggested that it could seek to overturn the 1973 Roe v Wade decision that legalised abortion across the United States.

Amazon's announcement will cover both warehouse and corporate office employees who are enrolled in one of two available health insurance plans, Reuters reported.

The benefit is not specific to abortion; the company said it would also pay travel costs arising from other non-life threatening treatments including cellular gene therapies and treatment for addiction.

Amazon joins a list of US firms that have announced plans to help their employees access reproductive healthcare as many Republican-led states move to limit the availability of abortions.

Earlier this month, San Francisco-based reviews platform Yelp said it would cover the travel costs for US-based employees and their partners forced to travel out of their home state for abortions.

Yelp has around 200 workers in Texas, which introduced a strict law - known as Senate Bill 8 or "SB8" - effectively banning abortions after six weeks of pregnancy in May last year.

If the Supreme Court were to overturn Roe v Wade, performing an abortion in Texas would become illegal, with the only exceptions being cases where the pregnant patient's life or "major bodily function" were at risk.

The company policy covers all Yelp staff who could be affected by "current or future action that restricts access to covered reproductive health care," a company representative told the New York Times.

Other companies pledging to support access to reproductive healthcare include rideshare services Uber and Lyft, which last week announced they would cover any legal fees of drivers accused of "aiding or abetting" an abortion by transporting passengers to clinics in Oklahoma.

Last year, dating conglomerate Match.com said it would set up a fund to pay for Texan workers to access abortions outside the state, while cloud software giant Salesforce went a step further, offering to help relocate employees and their families out of the southern state altogether.

But while American companies are promising to help their staff access reproductive healthcare, political donation records gathered by campaign funding watchdog Open Secrets showed that many had previously donated to members of the conservative Republican party who oppose access to abortion.

In Amazon's case, over 72 per cent of its donations to candidates for the US Senate during the 2020 election went to Republicans.

These included $10,000 (€9,488) to Cory Gardner, a former senator from Colorado who voted to defund US abortion provider Planned Parenthood at least ten times during his time as an elected representative.

"I will never waver in my defence of the unborn,” Republican Landry said in a press release announcing his support for a Mississippi law banning abortion after 15 weeks, "and I will always support a state’s right to protect the unborn and their mothers".