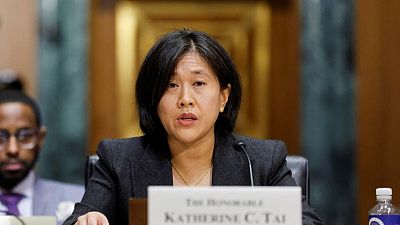 WASHINGTON -U.S. and British trade officials will meet again in Boston in June to continue their dialogue on strengthening trade ties, the two countries said in a joint statement on Tuesday, after two days of talks in Aberdeen, Scotland.

The roadmap will also look at promoting environmental protection and the transition to net zero, supporting high labor and environmental standards, and promoting innovation, it said.

Tai and Trevelyan met with stakeholders from the U.S. and UK business communities, trade unions and civil society, during the talks in Aberdeen. Those came after similar talks in Baltimore last month.

They pledged to stand with Ukraine in the face of Russian President Vladimir Putin’s “unprovoked, premeditated attack” and said they were ready to increase the economic pressure on Russia, the statement said.

Russia describes its action as a “special military operation.”

“Ministers agreed that their officials would remain closely coordinated, and they will encourage other international partners, including the (Group of Seven advanced economies) and other (World Trade Organization) members, to take action in support of Ukraine’s economic recovery,” the statement said.

The date of the June meeting in Boston was not disclosed.

Given the lack of progress on a broad U.S.-UK trade agreement, Britain is working with about 20 U.S. states to secure individual trade deals as soon as next month, trade policy minister Penny Mordaunt told parliament last week.

Britain and the United States entered into formal negotiations about a bilateral trade deal under the former Trump administration, but the government of President Joe Biden shelved those talks to focus more on specific challenges such as labor rights, supply chains and the low-carbon transition.