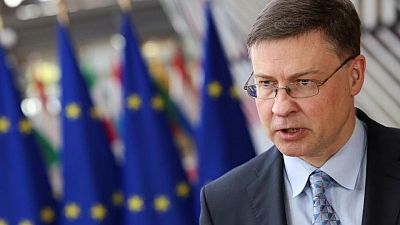 BRUSSELS -The European Commission proposed on Wednesday a one-year suspension of import duties on all Ukrainian goods not covered by an existing free trade deal to help the country’s economy during the war with Russia.

The measures will apply in particular to fruit and vegetables, subject to minimum price requirements, agricultural products facing quotas, and certain industrial goods, tariffs on which were only due to be phased out by the end of 2022.

That phase-out, set out in the 2016 EU-Ukraine free trade agreement, applies to fertilisers, aluminium products and cars.

“Right now this will allow us to maintain economic activity in Ukraine, our national production, as much as possible. But this decision needs to be considered not only in the Ukrainian context,” he said in a late-night video address.

“Sufficient export of our products to European and global markets will be a significant tool against crises.”

The proposal will now need to be agreed on by the European Parliament and EU governments to come into force.

The European Commission, which oversees trade policy in the 27-nation EU, said the unprecedented measures were designed to alleviate difficulties for Ukrainian producers and exporters in the face of Russia’s invasion.

“Since the start of Russia’s aggression, the EU has prioritised the importance of keeping Ukraine’s economy going – which is crucial both to help it win this war and to get back on its feet post-war,” Commission Vice President and Trade Commissioner Valdis Dombrovskis said.

With Ukrainian shipping via the Black Sea now cut off by the Russian navy, the EU has also moved to help land transport of Ukrainian goods, for example by easing the entry conditions for Ukrainian truck drivers.