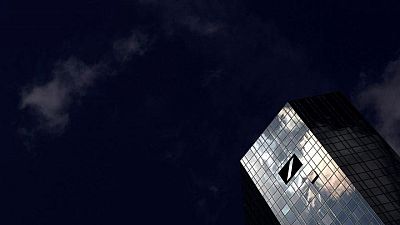 FRANKFURT – Deutsche Bank posted a better-than-expected 17% climb in first-quarter profit as investment banking revenues rose, but it warned that the Russia-Ukraine conflict could hurt full-year results.

Funds it sets aside for credit losses are expected to increase “significantly” this year due to the war and slower growth, it said.

Net profit attributable to shareholders came in at 1.06 billion euros ($1.1 billion), better than analyst expectations of around 950 million euros.

It was a seventh consecutive quarter of profit, the bank’s longest streak in the black since 2012, and marks its highest quarterly income since 2014.

Germany’s largest lender said it was sticking to its annual targets for now, but warned “the current environment is increasingly challenging, and cost pressures have intensified”.

Investors have questioned whether the bank will meet its target for return on tangible equity or ROTE this year but the bank said it was well positioned to achieve the goal.

The quarterly earnings are nevertheless a boost for Chief Executive Christian Sewing who was promoted to the top job in 2018 to turn Deutsche around after a series of embarrassing and costly regulatory failings.

But they come after some of its biggest investors, including the U.S.‘s Capital Group and Cerberus, have shed their stakes, raising questions about its prospects.

Deutsche Bank has lost more than 9 billion euros over the past decade, and its health remains under the close watch of regulators as one of the world’s most important banks for the financial system.

Russia’s invasion of Ukraine has cast a pall over the bank because of Germany’s links to the Russian economy and its own operations there.

Deutsche – like its U.S. competitors – was hurt by declines in dealmaking amid the uncertainty created by the war, although trading held up because of volatile markets.

Revenue from the investment bank’s origination and advisory business declined 28% in the quarter, while revenue for fixed-income and currency trading, one of the bank’s largest divisions, rose 15%.