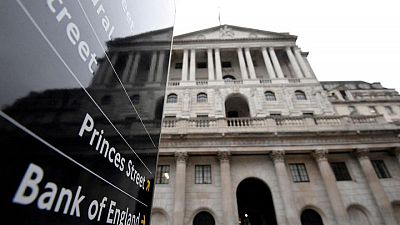 LONDON – The Bank of England next week will try to walk what Governor Andrew Bailey calls a “very tight line” between tackling inflation speeding way above the BoE’s target and not triggering a recession.

The BoE is expected to raise interest rates at a fourth meeting in a row on May 5, the first time it has done that since 1997, as it moves faster than other central banks to tackle the surging price growth that they once described as transitory.

Financial markets have fully priced in a quarter-point rise in Bank Rate to 1.0%, its highest since 2009, and investors are more focused on what the BoE signals about its next moves.

Bracing for a big hit to household incomes, the BoE in March toned down its message about rate hikes, saying “some further modest tightening might be appropriate in the coming months,” having previously said it was likely.

Since then, inflation has accelerated to 7%, more than three times the BoE’s target. But the economy is also showing slowdown signs, deepening the BoE’s dilemma.

“We are now walking a very tight line between tackling inflation and the output effects of the real income shock, and the risk that that could create a recession,” Bailey said last week.

The BoE may try to convince investors again that it will not raise rates as much as they expect. Rate futures are pricing Bank Rate hitting 2.25% by the end of this year with an outside chance of a 50 basis-point hike next week.

But markets are also heeding the weakening economy. Sterling fell to a 21-month low against the U.S. dollar on Wednesday.

Economists polled by Reuters mostly expect Bank Rate to rise to 1.5% by early 2023 and stay there throughout the year.

Not everyone agrees. Consultancy Capital Economics thinks the BoE will have to take rates to 3% in 2023 after inflation hits 10% this year and the tight labour market pushes up pay.

Data on Wednesday showed employers were starting to offer the biggest annual pay rises since 2008, but the increases were still not keeping up with inflation.

“Admittedly, by focusing on containing any second-round effects on wages and prices, the Bank risks tipping the economy into recession,” Capital Economics’ Paul Dales said.

As well as the BoE’s language next week, its inflation forecasts will signal how quickly it might raise rates.

In February it saw inflation falling to 1.6% in three years’ time, based on investors’ bets on future rate hikes. That was the biggest projected undershoot of its 2% target in a decade.

The war in Ukraine has added to immediate price pressures and the BoE might raise its 8% inflation peak forecast. But the slowing economy could push its medium-term inflation forecasts even lower than in February.

Consumer confidence has slumped close to a record low, retail sales have fallen for two months and there have been some early hints of a slowdown in job creation, potentially easing the BoE’s fears about a price-wage spiral.

“The latest data are starting to vindicate its expectation of a demand slowdown,” HSBC economist Elizabeth Martins said.

In February, before the slowdown signals, four MPC members voted for a 50 basis-point rate hike. Five backed a 25 basis-point increase.

The BoE might also hope to show it can tackle inflation without a string of new rate hikes by detailing how it will sell down the almost 850 billion pounds ($1.1 trillion) of government bonds it holds after a decade of asset-purchase stimulus.

The central bank has previously said it would consider beginning bond sales when Bank Rate hits 1%.