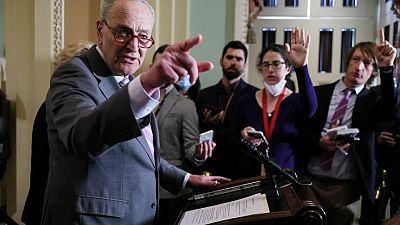 By Richard Cowan and David Shepardson

WASHINGTON -U.S. Senate Democratic leader Chuck Schumer said on Tuesday that he hoped Twitter did not become a “darker” place under the ownership of Elon Musk, with many lawmakers strongly divided on the ramifications of such a deal.

“In many ways Twitter has been a dark, dark place. I hope it doesn’t get any darker,” Schumer told reporters when asked about Musk’s purchase of the social media company.

Schumer’s Republican counterpart, Senator Mitch McConnell, called the Musk takeover an “incredible event.” He added: “It will be interesting to see what impact it has on the way Twitter operates. But we’re all watching it with a great deal of interest because there certainly have been our share of complaints about the way it has been run in the past.”

On Monday, Musk nailed down a deal to buy Twitter Inc for $44 billion.

Many Democrats want to use the purchase to advance legislative efforts. Some Democrats say the purchase shows that Congress must do more to tax billionaires or impose privacy protections and other rules to rein in tech companies.

Democratic Senator Elizabeth Warren called Musk’s purchase “dangerous”… “Billionaires like Elon Musk play by a different set of rules than everyone else, accumulating power for their own gain. We need a wealth tax and strong rules to hold Big Tech accountable.”

Democratic Ed Markey wrote on Twitter that “Elon Musk and a handful of billionaires now have dangerous influence over the most powerful online platforms. They can’t be trusted, and self-regulation has failed. We must pass laws to protect privacy and promote algorithmic justice for internet users, especially for kids.”

Democratic Senator Ron Wyden, who chairs the Finance Committee, called for higher taxes on the wealthiest Americans, writing on Twitter that “if billionaires like Elon Musk can afford to scoop up media trophies for $44 billion they can afford to pay their taxes.”

Musk previously has directed crude insults at Wyden and other Democratic U.S. politicians on Twitter, including President Joe Biden.