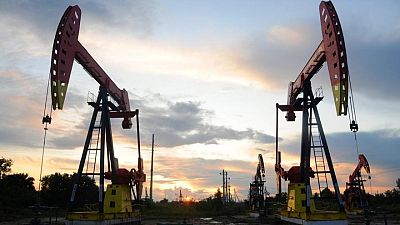 HOUSTON -Oil slipped on Friday, posting a weekly loss of nearly 5%, on the prospect of weaker global growth, higher interest rates and COVID-19 lockdowns in China hurting demand even as the European Union considers a ban on Russian oil that would tighten supply.

Global benchmark Brent hit $139 a barrel last month, its highest price since 2008, but both oil benchmarks declined nearly 5% this week on demand concerns.

The International Monetary Fund, which this week cut its global economic growth forecast for 2022, could further downgrade it if Western countries expand their sanctions against Russia over its war against Ukraine, and energy prices rise further, the agency’s No. 2 official said.

The German government will cut its growth forecast for 2022 to 2.2% from 3.6%, a government source said, while Chinese demand for gasoline, diesel and aviation fuel in April is expected to slide 20% from a year earlier, Bloomberg reported, as many of China’s biggest cities, including Shanghai, are in COVID lockdowns.

Federal Reserve Chair Jerome Powell on Thursday said a half-percentage-point increase in U.S. interest rates “will be on the table” at the next Fed policy meeting in May, pushing the dollar to more than a two-year high. A stronger greenback makes oil and other commodities more expensive for those holding other currencies.

“At this stage, fears over China’s growth and overtightening by the Fed, capping U.S. growth, seem to be balancing out concerns that Europe will soon widen sanctions on Russian energy imports,” said Jeffrey Halley, analyst at brokerage OANDA.

Speculators’ net long bets on the U.S. dollar fell for a third straight week, according to calculations by Reuters and U.S. Commodity Futures Trading Commission data released on Friday.

On the supply side, the Russia-Kazakh Caspian Pipeline Consortium (CPC) is expected to resume full exports from April 22 after almost 30 days of disruptions, sources said.

The U.S. oil rig count rose by one to 549 this week, the highest number since April 2020, according to a Baker Hughes Co report.

Still, supply tightness provided support as Libya loses 550,000 barrels per day (bpd) of output due to disruptions. Supply could be squeezed further if the EU imposes an embargo on Russian oil.

An EU source told Reuters this week the European Commission was working to speed up availability of alternative energy supplies, while a senior White House adviser said he was confident Europe is determined to close off or further restrict remaining Russian oil and gas exports.

The Netherlands said it plans to stop using Russian fossil fuels by the end of this year.

Morgan Stanley raised its third-quarter Brent price forecast by $10 per barrel to $130, citing a “greater deficit” this year due to lower supply from Russia and Iran, which is likely to outweigh short-term demand headwinds.

European refiners processed 9.04 million bpd of crude in March, down 4% from a month earlier and 4.8% higher than a year earlier, Euroilstock data showed.

“While we may slide, there’s a certain point at which we will find support because the fundamentals here are just too tight for things to slide very far,” said Robert Yawger, executive director of energy futures at Mizuho.