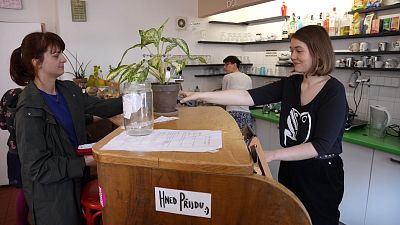 2022 is the European Year of Youth, and in this episode Real Economy asks: what is being done to help young people, and especially those from disadvantaged backgrounds, find jobs and training?

In the European Union young people aged 15-29 make up a sixth of the population. They have been some of the hardest hit by the economic effects of the pandemic, often the first to lose their jobs or to see a drop in income.

Although youth unemployment is coming down (14 % in February 2022 compared to 18.2% in the first quarter of 2021) young people are still twice as likely to be unemployed as the rest of the working-age population (where the average is 6.2 %.)

One in eight young adults in the EU are not in education, employment or training. They’re known as NEETs.

To help get young people into work, the EU’s Youth Guarantee guarantees that all young people under the age of 30 who sign up, will receive an offer of a job, apprenticeship, education, or training within four months.

Since it was adopted in 2013, more than 3 million young people have taken up an offer every year, with more than 36 million people helped so far.

EU Commissioner for Jobs and Social rights, Nicolas Schmit says that when countries implement the Youth Guarantee well it can have long-lasting results.

"When we look at the results, two years after entering the youth guarantee, we see around half of the young people are still engaged in a job or they are continuing their training or their professional education. So I would say overall, if well implemented, the Youth Guarantee is a very, very strong and helpful instrument."

One of the ways of helping implement the Youth Guarantee is offering young people from disadvantaged backgrounds a chance to gain new skills and confidence by working abroad.

A new initiative called ALMA, which stands for Aim, Learn, Master, Achieve, will offer exactly that across the EU later this year. It is inspired by a smaller, existing European initiative called TLN Mobility.

Real Economy went to meet young people in the Czech Republic who had spent time working in Dublin in Ireland, thanks to 'Expedition Ireland', part of TLN Mobility.

Julie Baštová grew up in foster families, often in difficult conditions. She trained as a social worker but recently went to Dublin to do a work placement in graphic design, her passion.

"I was able to work without any previous experience in this area. I couldn’t have done that here. I learned a lot thanks to the programme. I was able to see what a workplace is really like. I also helped to illustrate a children's book, so I have something to show for it," Julie explains.

With a total budget of abound 100 million euros - 70% of which comes from the European Social Fund - this programme has already supported around 7,000 disadvantaged young people in finding work.

Although Julie is currently working as a social worker again, she intends to become a graphic designer.

"I'm continuing on this path, I’m doing training, and also some extra work on the side. I’ve learned to be much more self-reliant," she says.

Throughout the project, a mentor is on hand every step of the way to help participants with things like English lessons, finding an internship, and offering support.

Something which is vital, according to Tomke Trávníček, the national manager for TLN Mobility in the Czech Republic.

"For the disadvantaged youth, that has no experience with going abroad, quite often they have unfinished education. They wouldn’t leave on an Erasmus programme, because they are too afraid. And once they are abroad, their motivation gets higher, their self-esteem gets much higher, and also they get work experiences," Tomke explains.

"I was kind of lost"

Denisa Hönigová suffers from social anxiety, something which has greatly affected her life. Denisa didn’t finish her education and has found holding down a job difficult because of her condition.

Since returning from Ireland she has been working in a café and hopes to set up her own business.

"I was kind of lost, and maybe in the hopes of getting something better, improving myself. I think going to a different country, experiencing all these things that I did, working and talking to strangers all the time, living with strangers actually as well, helped a lot," Denisa says.

The experience enabled Denisa to improve her relationships with others. The internship also helped her to decide what she would like to do in the future which is to work in alternative fashion.

"It definitely made me realise that I want to have maybe my own brand eventually, so I am working on that."

In 2019, one in three young people spent at least two weeks abroad for work or training. But this trend can put vulnerable young people who have fewer opportunities at a disadvantage.

"This gives one thing which these young people need absolutely: this is confidence in themselves" says EU Commissioner for Jobs and Social rights, Nicolas Schmit.

"Offering them a new opportunity, a new chance to discover something, but also to become autonomous. This is, I think, what can help these young persons afterwards to build their own life, to build a career, to enter into some stable job."

In Brussels, the European Youth Forum warns that certain guarantees need to be in place for ALMA to ensure the placements don't just become unpaid internships.

Real Economy's Naomi Lloyd put these concerns to EU Commissioner Nicolas Schmit, asking him how he would ensure that unpaid internships don't happen.

Schmit stated that any young person working as part of ALMA would indeed be paid. "The company employing this young person will have to pay a salary. And it has to be at least minimum wage."

He added that they will also "have social protection - social security, which is taken in charge by European funds, by ESF."

A new group of young people suddenly and unexpectedly looking for work or to continue their education in Europe are young Ukrainians fleeing Russia’s war on their country.

The European Union has given them the right to work and to study and has recently announced funds to help.

"These are funds which have not been used yet in the cohesion funds, but also in the ESF," explains Schmit, "we are talking about billions of euros which can be used rapidly."

He says member states are invited to "please take this money, and you can in a very flexible way use this money to finance projects for the Ukrainian refugees."

The EU Commissioner explained how the EU is also helping young Ukrainians access the labour market.

How is the European Child Guarantee initiative fighting child poverty?