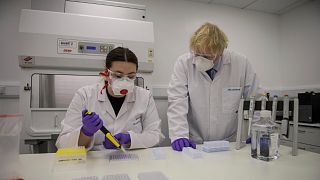 Britain has become the first country to approve Valneva's inactivated COVID-19 vaccine, which is easier to store than mRNA vaccines and relies on decades-old technology widely used in flu and polio jabs.

Valneva, a French biotech firm, is hoping the shot will appeal to people who are reluctant about getting the Pfizer-BioNTech or Moderna jabs and may prefer a more traditional one.

The vaccine is currently under review by the European Union’s medicines regulator.

How does Valneva's vaccine work?

Valneva's shot is the sixth COVID vaccine to be approved in the UK, but the first whole-virus inactivated one.

In this type of vaccine, the virus is grown in a lab and then made completely inactive so that it cannot infect cells or replicate in the body, but can still trigger an immune response.

This process is already widely used in the production of flu and polio vaccines.

Valneva's vaccine is also simpler to store as it requires a temperature of 2°C to 8°C similar to that of a domestic refrigerator. That makes it easier to use in countries where storing vaccines at ultra-low temperatures - as required for mRNA vaccines - is a challenge.

Valneva's COVID vaccine is approved for use in the UK in people aged 18 to 50 years, with the first and second doses to be taken at least 28 days apart.

The marketing authorisation comes despite the UK government's decision last September to cancel a €1.4 billion order for at least 100 million doses.

Health Secretary Sajid Javid said at the time that he couldn't go into details because of commercial issues but that the deal was scrapped because "it was also clear to us that the vaccine in question that the company was developing would not get approval".

Britain was an early backer of Valneva's vaccine, agreeing to invest millions in a production facility in Scotland.

Even without the Valneva vaccine, the government has acquired more than enough doses to fully vaccinate everyone in the country twice. To date, nearly 60 per cent of the British population has received three doses.

The European Medicines Agency (EMA) is currently assessing Valneva's vaccine after the European Commission signed an advance deal for up to 60 million doses.

Valneva said in March it expected a positive EMA recommendation this month and that it had begun manufacturing and has inventory ready for labelling and deployment once it is approved there.