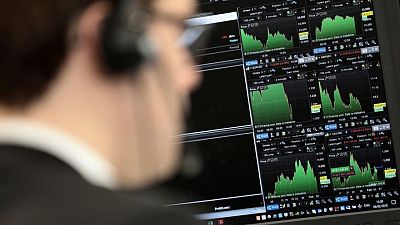 The Japanese yen weakened past the 126 yen per dollar mark on Wednesday for the first time since 2002, while the euro was pinned at a one-month low as investors bought the U.S. currency after hawkish comments by Federal Reserve officials.

The prospect of fast and aggressive U.S. interest rate hikes and growing market expectations that the Bank of Japan will keep rates ultra-low in the near term have fueled the Japanese currency’s declines against the dollar.

Meanwhile, U.S. Treasury yields fell – and data on inflation did not dissuade investors from believing that inflation may have peaked.

Equity markets have suffered from hawkish moves from the world’s top central banks in response to inflation, analysts said.

But data on Wednesday showed no let-up for Britain after inflation hit a 30-year high of 7%, although this came a day after a lower-than-expected U.S. print had given some traders cause to hope policy would be tightened more slowly.

“Another month, another jump in inflation figures around the world,” said Oliver Blackbourn, portfolio manager at asset manager Janus Henderson.

“The increase in prices further ratchets up the pressure on the Bank of England to respond to dampen the squeeze on real incomes. However, fading growth forecasts show the danger to the economy from tightening too quickly or too far.”

Investors, poised for lackluster earning results from the largest U.S. banks, have been eyeing investment banking revenue, which has stalled after the Russian invasion of Ukraine in late February. In the first quarter, the total value of pending and completed deals fell to its lowest since the second quarter of 2020, according to Refinitiv data.

Overnight in Asia, much weaker-than-expected import data from China weighed on the outlook, but added to views that Beijing could ease policy further, helping MSCI‘s broadest index of Asia-Pacific shares outside Japan closed 0.89% higher.

Japan also posted weak machinery orders data, although its stocks closed higher on the U.S. inflation data that had shown consumer prices rose by the most in 16-1/2 years in March as war in Ukraine boosted the cost of gasoline to record highs, although underlying inflation pressures moderated.

After the prior day’s fall, the yield on 10-year Treasury notes rose on Wednesday and was last down 5.3 basis points to 2.674%, compared to an over three-year peak of 2.836%, before the inflation data.

The two-year U.S. Treasury yield, which typically moves in step with interest rate expectations, was down 5.5 basis points at 2.334%.

“The most important issue this year is how the Federal Reserve is going to respond to the rising levels of inflation,” said Chris Zaccarelli, chief investment officer at Independent Advisor Alliance in Charlotte, North Carolina.

In the euro zone, meanwhile, a key gauge of long-term inflation briefly breached 2.4% on Wednesday, above the European Central Bank’s 2% target ahead of its next meeting on Thursday.

In currency markets, the euro was last up 0.52% to $1.0882. The U.S. dollar soared to a nearly 20-year high against a sluggish yen on Wednesday, as aggressive tightening from the Federal Reserve contrasted sharply with the Bank of Japan’s ultra-loose monetary policy.

The New Zealand dollar was down 1.1% after the Reserve Bank of New Zealand raised interest rates by 50 basis points — its most aggressive hike in over two decades — but tempered its rate outlook.

Meanwhile, the Bank of Canada on Wednesday raised interest rates by half a percentage point – its biggest single move in more than two decades – and promised more hikes to fight soaring inflation that is being driven in part by the war in Ukraine.

The central bank raised its benchmark overnight rate to 1% from 0.5%. It also said it would allow government bonds it amassed during the COVID-19 pandemic to roll off as they mature from April 25, beginning what is known as quantitative tightening.