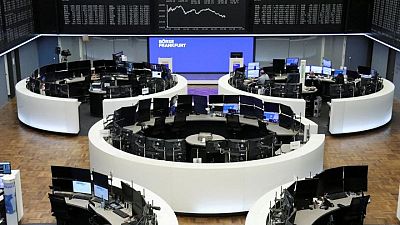 -European shares fell on Tuesday as Deutsche Bank and Commerzbank slumped after a big stake sale, while a U.S. reading on inflation kept aggressive Federal Reserve tightening bets from ramping up.

The pan-European STOXX 600 index fell 0.3%, paring some losses from earlier in the day, with healthcare stocks leading losses, and banks among the worst hit.

Deutsche Bank and Commerzbank fell 9.4% and 8.5%, respectively, after an undisclosed investor sold stakes of more than 5% in Germany’s top lenders.

The appetite for shares firmed slightly from earlier in the day after U.S. data showed consumer prices in the world’s largest economy rose largely in line with estimates, pushing U.S. Treasury yields lower. [US/]

After a strong rebound from March lows, the STOXX 600 has been stuck in a range on worries about the fallout of the Ukraine war, aggressive rate hikes by the Federal Reserve to tame inflation and rising coronavirus cases in China.

“That sinking feeling hit European shares amid concerns that inflationary pressures are still mounting and growing evidence that consumer confidence is suffering amid the cost of living squeeze,” said Susannah Streeter, senior investment and markets analyst at Hargreaves Lansdown.

“The increasingly entrenched Ukraine conflict has already sent commodity prices soaring… The sanctions screw expected to be turned tighter on Russia, and the European Union is thought to be inching closer towards agreeing a Russian oil embargo,” she said, adding that the associated supply fears were pushing up crude prices.

Oil & gas stocks gained 1.3% as crude prices rose after falling below $100 a barrel in the previous session. [O/R]

U.S. quarterly earnings season is set to begin this week with Wall Street banks. In Europe, the reporting season will kick into high gear later this month, with analysts’ predicting a 19.9% rise in profit for STOXX 600 companies, as per Refinitiv data.

Nokia slipped 1.4% after Pekka Lundmark, chief executive officer of the telecoms equipment maker, told Reuters the firm is pulling out of the Russian market.

German investor sentiment fell by less than expected in April, a survey showed, as a decline in inflation expectations gave some cause for hope about the outlook for Europe’s largest economy.