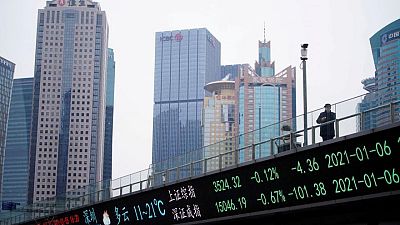 The U.S. dollar hit its highest in nearly two years.

Brainard said she expects a combination of interest rate increases and a rapid balance sheet runoff to bring U.S. monetary policy to a “more neutral position” later this year, with further tightening to follow as needed.

Separately, San Francisco Fed President Mary Daly pointed to the next meeting, scheduled for May 3-4, as a possible start to the balance sheet reduction.

Wednesday brings the release of minutes from the Fed’s last policy meeting. The ECB will publish its equivalent minutes on Thursday.

Tech and growth shares led the decline on Wall Street, with higher rates seen as a negative for growth stocks.

Investors were also keeping a close watch on developments on Russia’s invasion of Ukraine, with the West preparing to expand sanctions to include a ban on all new investments in Russia.

Ukrainian President Volodomyr Zelenskiy told the U.N. Security Council on Tuesday that Russia must be held accountable over allegations of war atrocities.

The Australian dollar gained, boosted by the prospect of policy tightening by the Reserve Bank of Australia. The Aussie dollar rose 0.4% to US$0.77521, while the New Zealand dollar gained 0.2% to US$0.6937.

Soaring global energy and food prices mean almost 60% of developed economies now have year-on-year inflation above 5%, the largest share since the late 1980s, while it is above 7% in more than half of the developing world.