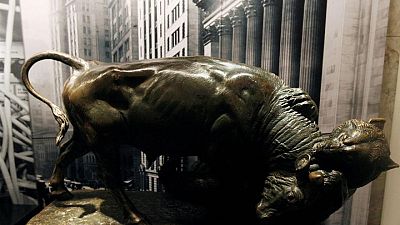 The March 21-31 survey captured this defensive strategy many fund managers adopted after the Russia-Ukraine war broke out. The February survey was taken partly before Russia’s Feb. 24 invasion but had still hinted at caution.

Recommended equity allocations were lowered to an average of 48.5% of the model global portfolio of 35 fund managers and chief investment officers in the United States, Europe and Japan, the lowest since end-2020. It was at 49.5% in February.

But the S&P 500 has staged a quick rebound, up 11% since March 8, its biggest 15-day percentage gain since June 2020 when the market was recovering from a steep sell-off near the start of the COVID-19 pandemic.

In the last month, asset managers increased their cash buffer to 4.5%, from 4.2%, the highest since November 2020.

“Our view is markets are close to pricing in our central scenario, where the Federal Reserve continues on its policy tightening cycle and in turn reduces inflation without causing a significant growth slowdown,” said Craig Hoyda, senior quantitative analyst at abrdn.

“However, we view risks as skewed to the downside, with risks of a global recession within the next two years as 20%-30%.”

The spread between U.S. 2-year and 10-year Treasuries flashed signs of a recession on Tuesday when it briefly inverted before turning positive again.

This inversion, when sustained, has previously been an accurate predictor of recession.

Not all fund managers were as cautious, especially given the increase in inflation to multi-year highs in nearly every major economy.

“In an inflationary environment, equities are the only large and liquid asset class accessible to all that can generate significant real returns,” said Christopher Rossbach, chief investment officer at J. Stern & Co.