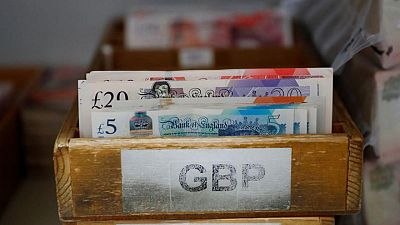 LONDON – The British pound rose against the U.S. dollar but declined against the euro on Wednesday amid uncertainty over the possibility of a ceasefire between Russia and Ukraine.

Russia on Tuesday promised to scale back its military operations near the Ukrainian city of Kyiv, but the United States said it had not seen “signs of real seriousness” from Moscow in pursuing peace.

“European FX, notably the euro and GBP have benefitted from an unwind of Russian risks,” said Justin McQueen, a strategist at DailyFX.

“However, given that we have seen significant cross-EUR/GBP buying, aided by narrowing rate differentials, the upside in the pound has been modest at best,” McQueen added.

Against a strengthening euro, the pound was down 0.1% after earlier falling to its weakest level against the single currency since Dec. 23.

Meanwhile, data from the British Retail Consortium showed major retailers raised their prices by 2.1% in March, the fastest annual increase since September 2011 and the fifth consecutive monthly rise.

The data signals price pressures are continuing across the economy, handing the Bank of England a dilemma as a cost-of-living squeeze adds to growth risks.

“From the narrow perspective of monetary policy it will result in the near term in the difficult combination of even higher inflation but weaker domestic demand and output growth,” Broadbent said.

The BoE has signalled it could be prepared to pause its tightening cycle after the next meeting, according to Michael Brown, head of market intelligence at Caxton.

However, money markets are pricing in a further 139 basis points of tightening by the end of the year, which would take the BoE’s bank rate above 2.0%.

“There’s a clear divergence here, which leaves the pound vulnerable to downside were hikes to be priced out,” Brown wrote in a note.