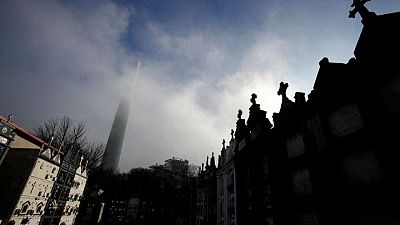 LONDON -There are no major abnormalities in the European Union’s large market for carbon emissions, but tighter controls could improve transparency and monitoring hampered by Brexit, the EU’s securities watchdog said on Monday.

The market, made up of a primary market of allowances and a secondary market of mainly derivatives based on allowances, is core EU plank for cutting carbon emissions by putting a price on pollution that companies emit.

Permits in the EU carbon market hit a record high of 98.49 euros in February, having risen by about 150% in 2021, prompting some countries such as Poland to call for the EU to restrict financial speculators’ participation in the market.

But the European Securities and Markets Authority’s (ESMA) final report https://www.esma.europa.eu/sites/default/files/library/esma70-445-38_final_report_on_emission_allowances_and_associated_derivatives.pdf on Monday found no major deficiencies, echoing conclusions from a preliminary assessment last November of a market that accounted for almost 90% of global carbon market value in 2020.

“Based on the data set that we have available, we cannot certainly claim that we did see any cornering of the market,” Carsten Ostermann, head of ESMA‘s trading unit, told a media call.

Positions by investment funds remain limited, and principally held by funds based outside the bloc, it said.

ESMA said it will consider whether to tighten transparency requirements for emission allowances and their derivatives need tightening.

EU policymakers could go further and consider limits on positions that can be held in carbon derivatives, a measure already in place for some commodities, along with centralised market monitoring of the carbon market at the EU level, it added.

ICE Endex, which dominates open positions in secondary trading with an 85% market share, moved from London to the Netherlands in 2021 due to Brexit, making it harder for ESMA to track users in Britain.

“These challenges make it very complex to obtain a clear picture of who trades and from where and need to be addressed in order to improve future monitoring of EU carbon markets,” ESMA said.