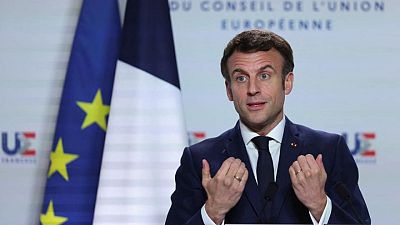 BRUSSELS – French President Emmanuel Macron said on Friday there was no reason to accept a demand from Russia to pay up in roubles for Russian gas.

“All the texts that have been signed are clear. This is forbidden,” Macron told a news conference after a European Union summit in Brussels.

“European firms that buy gas and which are operating on European territory have to do so in euros. Therefore it is not possible today to do what is being demanded, it is not contractual,” added Macron, referring to the Russian demands to be paid in roubles.

Russian President Vladimir Putin had said earlier this week that Russia will seek payment in roubles for gas sold to “unfriendly” countries, raising alarm about a possible gas crunch in Europe.

He said he did not believe that Russia wanted to break its contracts, but if that was the case, then Moscow should say it explicitly.

“The objective of this announcement, I think, is to find a way around sanctions, but it does not respect what was signed so why should we apply it?” he said.

Russia’s demands to switch gas contract payments to roubles have raised concerns of an energy supply squeeze and even higher prices.

In order to counter this, the United States and the European Union said on Friday that the U.S. will work to supply 15 billion cubic metres of liquefied natural gas (LNG) to the European Union this year to help it wean off Russian energy supplies.

The EU is aiming to cut its dependency on Russian gas by two-thirds this year and end all Russian fossil fuel imports by 2027 due to Russia’s invasion of Ukraine. Russia supplies around 40% of Europe’s gas needs.