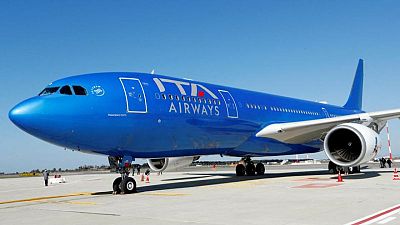 By Giuseppe Fonte and Francesca Landini

ROME – Italy’s Treasury has picked Equita and Gianni & Origoni as financial and legal advisers for the sale of stakes in ITA Airways, two sources close to the matter told Reuters on Thursday, as Rome intensifies efforts to find strategic partners for the carrier.

ITA took over from Alitalia in October, permanently grounding the 75-year-old, one-time symbol of Italian style and glamour after years of financial losses and failed rescue attempts.

Shipping group MSC and Germany’s Lufthansa have expressed interest in buying a majority stake in ITA and are waiting to gain formal access to sensitive data on the state-owned airline.

The government, which is entitled to inject 1.35 billion euros ($1.48 billion) into the carrier over three years as agreed with European Union authorities, approved a decree on February listing ways to sell ITA Airways under an open and market-based procedure.

Rome prefers to keep the door open to other potential suitors, government officials told Reuters at the time.

Asking not to be named due to the sensitivity of the matter, the sources said the advisers were Equita and Gianni & Origoni.

“The progressive strengthening of ITA‘s activities, together with the presence of several parties apparently interested in acquiring it, should ensure the success of the sale,” Franco said.

Under the government decree, the Treasury plans to privatise ITA through a direct sale or a public offer while retaining a minority, non-controlling stake in a first stage.

Governance agreements between the Treasury and the prospective partners will make it possible to pursue ITA‘s industrial targets.

In past decades, Alitalia tried and failed to clinch alliances with Air France, and more recently, Gulf airline Etihad.

Delta Air Lines Inc last week said it wanted to deepen its commercial ties with ITA Airways but was not interested in taking an equity stake in the carrier.