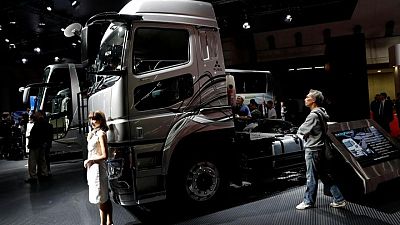 BERLIN – Daimler Truck said on Thursday it was not now in talks over whether it would take over a stake in Russia’s Kamaz from its former parent Mercedes-Benz AG, an issue that predated the Ukraine crisis.

Mercedes-Benz AG, then Daimler AG, took over a 15% stake in Kamaz from Daimler Truck in September 2021 with a view to returning it to Daimler Truck after the world’s largest truckmaker was spun off from the carmaker in December.

Russia’s invasion of Ukraine in February has complicated the process.

“We are certainly not in any talks with Russian government officials at the moment,” Daimler Truck Chief Executive Martin Daum said when asked about the future of the relationship to the Russian truckmaker at a news conference on Thursday.

“These shares can’t be moved because that needs government approval,” he said.

Approval is also needed from Russian regulators and Kamaz’s other shareholders, the largest of which is Russian state conglomerate Rostec.

Mercedes-Benz did not immediately respond to a request for comment on why it temporarily took on the stake.

A Daimler Truck spokesperson said that while government approval was needed for such transactions in most countries, Daimler Truck was waiting on additional approvals specific to Russia.

The spokesperson declined to comment on whether the company had purposefully put talks on hold, and said it was too soon to say whether it would keep the stake in the long-term.

Both Mercedes-Benz and Daimler Truck froze production in Russia following its invasion of Ukraine, including Daimler Truck’s cooperation with Kamaz.

Daimler Truck and Kamaz also have a joint venture, Daimler Kamaz, formed in 2009 producing trucks, buses, and Mercedes-Benz passenger cars, with the latter forming the largest part of its revenue, according to a Daimler Truck prospectus.

Daum said he did not know whether the factory owned by the joint venture was still running. “This factory needs parts from our side and we don’t deliver those parts. Most likely it’s not producing at all,” he said.