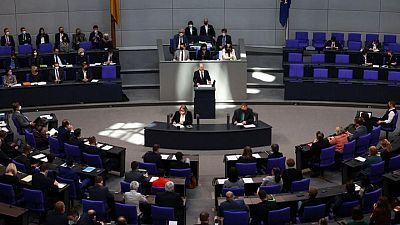 By Paul Carrel and Miranda Murray

BERLIN – Europe will end its energy dependence on Russia but to do so from one day to the next would plunge it into a recession, risking hundreds of thousands of jobs and entire industrial sectors, German Chancellor Olaf Scholz said on Wednesday.

In a budget speech to parliament, Scholz struck a more cautious tone on reducing Germany’s energy dependence on Russia than some of his ministers, who have left open the possibility of energy sanctions – if only in theory at this stage.

“Yes, we will end this dependency – as soon as possible. But to do this from one day to the next would mean plunging our country and the whole of Europe into a recession,” Scholz told the Bundestag lower house of parliament.

“Hundreds of thousands of jobs would be in danger. Whole branches of industry would be on the brink,” he said. “Sanctions should not hurt European states harder than the Russian leadership.”

The chancellor assured Ukrainian President Volodymyr Zelenskiy, who addressed the Bundestag https://www.reuters.com/world/europe/zelenskiy-urges-germany-tear-down-wall-between-peace-strife-europe-2022-03-17 last week, of Germany’s support for his country and said sanctions were hurting Russia. He called for an immediate ceasefire in Ukraine.

Scholz’s focus was primarily domestic when he took power last December but he quickly pivoted to a more assertive foreign policy https://www.reuters.com/world/europe/putin-forces-germany-step-up-role-global-power-2022-02-27 when the Ukraine crisis erupted, announcing a dramatic hike in military spending.

“(Russian President Vladimir) Putin needs to hear the truth about the war in Ukraine. And that truth is: the war is destroying Ukraine. But with the war, Putin is also destroying Russia’s future,” Scholz told the lawmakers.

There was no proof “that Putin is not only interested in a ‘dictatorial peace’,” he said, adding that Berlin would support Ukraine in the search for a political solution.

As part of its strategy to secure regional peace, Scholz said the European Union must support the Western Balkan countries in their bid to join the bloc as soon as possible.

Many in the Balkans doubt the EU’s pledge, first made 18 years ago, to eventually admit Serbia, Montenegro, Bosnia-Herzegovina, North Macedonia, Kosovo and Albania into the bloc.