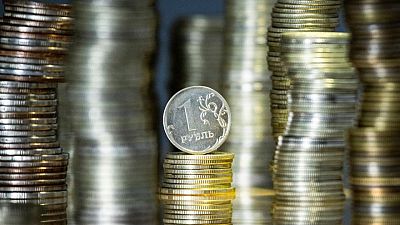 – The Russian rouble hovered around the 104 mark to the U.S. dollar most of the trading session in Moscow on Tuesday, lacking momentum for larger moves, while government OFZ bonds stabilised with the help of the central bank.

Russia confirmed its ability to service debt by paying a coupon on its Eurobond due in 2029, marking the second successful coupon payout in the past week.

The rouble has stabilised after falling to a record low of 120 in Moscow earlier in March and even further on the interbank market to 150 as Russia took a hit from unprecedented western sanctions in response to what Russia calls “a special operation” in Ukraine that started on Feb. 24.

Before that, the rouble traded at around 80 against the dollar.

The rouble is seen range-bound at 100-107 to the greenback and its further direction will depend on the political backdrop and volumes of Russian exports, Alor Brokerage said in a note.

Otkritie Bank said it expected the rouble to fall to 150 to the dollar by year’s end in a pessimistic scenario or firm to 85 in an optimistic one.

Trading on the OFZ bond market continued for the second day after it was shut in late February.

The central bank said last week it would begin buying OFZ bonds to limit volatility, after it held its key interest rate at 20% after an emergency rate hike in late February.

The central bank has so far not disclosed the size of its interventions on the OFZ market that helped stabilise prices and provided extra liquidity to the financial system.

“Judging by the levels at which the rouble sovereign debt is trading, the central bank is playing a decisive role in the pricing,” said Maxim Biryukov, senior analyst at Alfa Capital.

Yields on benchmark 10-year OFZ bonds, which move inversely to their prices, stood at 13.63% on Tuesday after hitting a record high of 19.74% the day before.

On Monday, OFZ trading volumes reached 13.8 billion roubles ($132.65 million), with 35% of turnover in the main session falling on individual investors. Before the crisis, an average daily turnover stood at 20 billion roubles, according to Alfa Capital.

The central bank has yet to say when trading in instruments like stocks can resume, as it seeks ways to clear a backlog of transactions while avoiding a market collapse. But a limited number of financial market operations have been permitted to resume over the next two weeks.