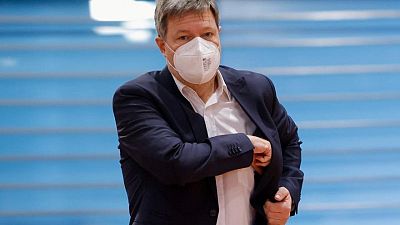 By Riham Alkousaa and Alexander Cornwell

ABUDHABI – German Economy Minister Robert Habeck added his voice to Western appeals for OPEC to increase oil production and said Gulf states should not profit from global sanctions against Russia over its invasion of Ukraine.

OPEC heavyweights Saudi Arabia and the UAE have resisted Western calls, including from the United States, to use their spare oil output capacity to tame prices that have surged as the invasion prompted fears of supply disruptions.

“I’m not asking that they join the sanctions … but I ask not to be a profiteer of European and U.S. sanctions,” Habeck, who is on a trip to the Gulf to discuss long-term energy supplies, such as hydrogen and liquefied natural gas, told reporters in Abu Dhabi on Monday.

Habeck reiterated Europe’s interest in OPEC increasing its output which was brought up briefly in a meeting with Emirati state oil firm ADNOC.

“We haven’t talked about oil except OPEC. In this respect, the appeal that the production volume be increased in such a way that the people of the world can pay for this oil as long as we need it,” Habeck said after a meeting with the company.

The German delegation is expected to hold talks with the UAE energy minister.

Habeck made clear he had not seen any evidence of sanctioned Russian wealth coming into the UAE, the region’s commercial hub which diplomats, company executives and financial sources have said has emerged as a safe haven for Russia’s rich.

The minister said he had spoken with Qatari officials about Russian wealth flowing into the country. Qatari authorities did not immediately respond to a Reuters’ request for comment.

Gulf states have tried to strike a balance between Western allies and Russia, with which they have energy and economic ties.

Russia is the largest supplier of gas to Germany and Habeck has launched several initiatives to lessen his country’s energy dependence on Moscow.

During his visit to Doha on Sunday, Germany said a long-term energy partnership had been clinched while Qatar said the two countries would re-engage and progress discussions on LNG gas supplies.

Habeck said Berlin was looking at hydrogen to reduce its need for gas as German firms signed several deals on hydrogen research and development on the UAE visit.

“Now, it’s a matter of agreeing on the big scaling,” he told reporters.

Hydrogenious and Uniper, along with Abu Dhabi National Oil Company (ADNOC) and Japan’s JERA, will undertake a joint demonstration project for hydrogen transport.