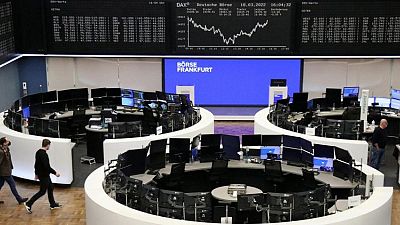 – European shares were subdued at the close on Monday after choppy trading, as the surge in energy stocks was offset by investor concerns around fighting in Ukraine.

The pan-European STOXX 600 was flat after posting its biggest weekly percentage gain since November 2020 on Friday.

Investors were closely tracking the war in Ukraine, with European Union governments mulling an oil embargo on Russia as they gather this week with U.S. President Joe Biden for a series of summits aimed at hardening their stance against Moscow.

The news sparked a rally in oil prices. Brent crude futures rose more than $3 to trade above $111 a barrel, lifting the European oil & gas sector by 3.0%. [O/R]

“European crude embargo is expected to be put on the table once more, with the possibility that more than a million barrels of Russian oil a day will be snubbed,” said Susannah Streeter, a senior investment and markets analyst at Hargreaves Lansdown.

“Given that the Netherlands and Germany combined received around a quarter of Russia’s crude and light oil exports, demand would shoot up for crude supplies from OPEC+ nations.”

Adding to investor concerns, U.S. Federal Reserve Chair Jerome Powell said on Monday that the central bank must move “expeditiously” to bring too-high inflation to heel, adding that it could use bigger-than-usual interest rate hikes if needed to do so.

European Central Bank President Christine Lagarde warned earlier in the day to expect the Fed and ECB to move out of sync in the foreseeable future, as the war in Ukraine has vastly different effects on their economies.

“For the ECB to say you could expect some policy divergence seems a bit strange at this moment unless there’s going to be some future policy announcement from the ECB that they’re going to take more notice of the growth deteriorating prospects caused by the fighting in Ukraine,” said Stuart Cole, head macro economist at Equiti Capital.

Among individual stocks, Julius Baer rose 0.6% after it said it had credit exposure to a low-single-digit number of clients subject to the recently introduced sanctions on the Russian market.