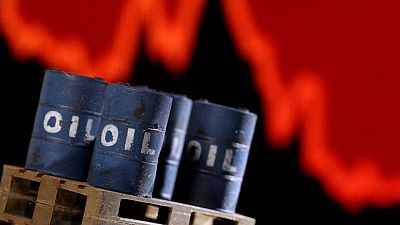 LONDON – A $40 a barrel rise and fall in oil prices in March pushed many investors to exit the volatile trade and created the conditions for more wild price swings in the weeks ahead, traders, bankers and analysts said.

The Russian invasion of Ukraine has driven many commodity prices to all-time highs, stretching the finances of companies worldwide that trade, process and consume the raw materials. They have had to borrow more from banks to finance their purchases and to meet cash requirements around futures and derivative positions.

Intraday volatility for some commodities has also spiked. Brent volatility is close to 80%, a level not seen since May 2020, and heating oil is at around 120%, driven by headlines ranging from peace talks between Moscow and Kiev to further sanctions on Russia.

The risk that accompanies sharp movements has overwhelmed many traders and investors who have been forced to reduce their exposure by either trading fewer commodities or cutting open interest in the derivatives market.

“Open interest has collapsed. The volatility was too hard to stomach,” a paper trader at a large trading firm said on condition of anonymity.

Open interest denotes the number of contracts that are active, and this figure falls when traders close more positions than are opened in a day.

Traders have also increasingly shifted to options as these contracts protect against extreme losses, but that has only added to the volatility.

The IEA said the number of open positions had shrunk across all oil futures contracts on NYMEX and ICE to levels last seen in early 2015 at the bottom of the commodity markets crash. JP Morgan said open interest across commodities fell by the most in 14 years by $71 billion in the last week, led by the energy market.

To an extent, traders thrive in volatile markets. However, extreme volatility can bankrupt a player caught on the wrong side of a trade.

On Wednesday, the European Federation of Energy Traders (EEFT), which includes oil majors and leading traders, called on governments and central banks to provide emergency assistance to avert a cash crunch.

Margin calls have amounted to billions of dollars across commodities since Russia began its invasion of Ukraine on Feb. 24.

The initial margin is collateral, or cash, posted by clearing members to the clearing house to cover potential losses in the event of a clearing member default.

Margin calls arise when the gap between the current spot price and the future sale becomes too wide, forcing traders to increase the deposit they hold at exchanges on each trade, typically 10%-15% of the value of the contract exchanges as proof they can deliver.

EFET said that one of its energy producer members posted an initial margin of 1 billion euros ($1.10 billion) in mid-2021 in natural gas futures. This month the same position required 6 billion euros ($6.63 billion) to back it. TIGHTSYSTEM The overall cost of maintaining core business for traders has surged.

Moving a million barrels of oil costs twice as much as it did in mid-2021. Oil and wheat futures hit highs in March not seen since the 2008 economic crisis.

One senior banking source, asking not to be named, said even before the invasion of Ukraine, trading firms were having to miss out on potential opportunities because of tight liquidity.

Traders are considering expensive alternative lenders, such as private funds, for more financing, John MacNamara of consultancy Carshalton Commodities said. Private funds will charge about double the interest of commercial banks. A trader at a mid-sized energy firm said the company was forced to tap alternative lenders earlier this month to cover urgent oil margins calls. “I have to settle my futures bill before I get the money on my physical cargo,” the trader said. “We need to downsize accordingly to ensure we don’t run out of cash.”