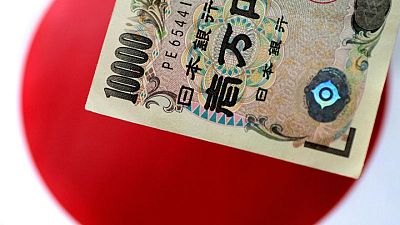 NEWYORK – The dollar dipped modestly against a basket of currencies on Monday but remained near a 21-month high hit last week as investors eyed Russia-Ukraine peace talks, while major central bank meetings this week kept large moves in foreign exchange in check.

Tentative hopes of progress in peace talks between Ukraine and Russia helped boost the appetite for riskier currencies on Monday, though upcoming central bank meetings and another COVID-19 pandemic-related lockdown in China kept risk-taking muted.

Russian and Ukrainian delegations held a fourth round of talks on Monday – by video link this time rather than in person in neighboring Belarus as in the past – but no new progress was announced and talks are expected to resume on Tuesday.

The U.S. Federal Reserve is widely expected to raise interest rates when it concludes a two-day policy meeting on Wednesday, with investors completely pricing in a hike of at least 25 basis points, according to CME‘s FedWatch Tool https://www.cmegroup.com/trading/interest-rates/countdown-to-fomc.html?redirect=/trading/interest-rates/fed-funds.html.

The dollar hit a more than five-year high against the Japanese yen at 118.05 on bets that the Bank of Japan, which meets on Friday, would maintain its dovish stance despite rising inflationary pressures.

The British pound gave up earlier gains and lost 0.15% against the greenback even as the Bank of England appears poised to lift interest rates to 0.75% on Thursday, its third hike in a row, as it seeks to rein in a surge in inflation intensified by Russia’s invasion of Ukraine.

The Australian dollar fell 1.2% as commodity prices eased, while the New Zealand dollar was down 0.8%.

The Russian rouble strengthened 8.96% versus the greenback at 114.88 per dollar.

China’s lockdown measures to limit the spread of COVID-19 lifted the dollar to 6.3961 versus the offshore yuan, the yuan’s weakest in two months. The yuan rose 0.56% versus the greenback at $6.3940 per dollar.

China has reported more local symptomatic COVID-19 cases so far this year than in all of 2021, as the highly transmissible Omicron variant causes outbreaks from Shanghai to Shenzhen.