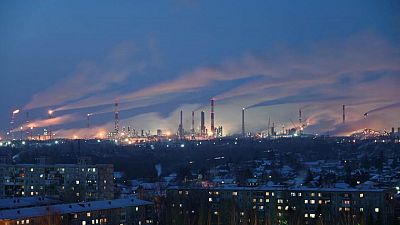 BENGALURU -Oil prices settled higher on Friday but posted their steepest weekly decline since November, as traders assessed potential improvements to the supply outlook that has been disrupted by Russia’s invasion of Ukraine.

Crude prices have soared since the invasion, which Moscow calls a “special military operation.” This week, futures benchmarks hit their highest levels since 2008, then pulled back sharply as some producing countries signalled they may boost supply.

On Friday, supply concerns grew when talks to revive the 2015 Iran nuclear deal faced the threat of collapse after a last-minute Russian demand forced world powers to pause negotiations.

“Iran talks on hold is one factor supporting markets,” said UBS analyst Giovanni Staunovo, adding that “market participants will now closely track Russian export data to get a sense how much (supply) is disrupted.”

Next week, Staunovo said, the focus will shift to oil market reports from the International Energy Administration (IEA) and the Organization of the Petroleum Exporting Countries (OPEC). Both have indicated the market should be oversupplied this year.

The data is an early indicator of future output. U.S. government officials have called on domestic and global producers to ramp up output.

This week, the Russia-Ukraine conflict pushed the United States and many Western oil firms to stop buying Russian oil. There was talk of potential supply additions from Iran, Venezuela and the United Arab Emirates.

“We have a close eye on the pressure valves that will absorb the supply shock,” said UBS head of economics Norbert Ruecker.

In the near term, supply gaps are unlikely to be filled by extra output from members of the OPEC and allies, together called OPEC+, given Russia is part of the grouping, Commonwealth Bank analyst Vivek Dhar said.

Some OPEC+ producers, including Angola and Nigeria, have struggled to meet production targets, limiting the group’s ability to offset Russian supply losses.