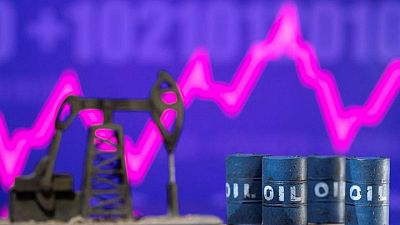 By Shariq Khan and Stephanie Kelly

BENGALURU -Oil prices jumped on Monday to their highest levels since 2008 as the United States and European allies considered banning Russian oil imports while it looked less likely that Iranian crude would return switftly to global markets.

“The bigger picture is that supply disruptions are getting worse,” said Andrew Lipow, president of Lipow Oil Associates in Houston. “Nobody wants to touch anything related to Russia.”

Global oil prices have spiked about 60% since the start of 2022, raising concerns about global economic growth and stagflation. China, the world’s No. 2 economy, is targeting slower growth of 5.5% this year.

On Sunday, U.S. Secretary of State Antony Blinken said the United States and European allies were exploring banning imports of Russian oil. The White House on Monday said President Joe Biden has not made a decision on a ban on Russian oil imports.

Oil prices could climb to over $300 per barrel if the United States and European Union ban imports of oil from Russia, Deputy Prime Minister Alexander Novak said on Monday.

“We consider $125 per barrel, our near-term forecast for Brent crude oil, as a soft cap for prices, although prices could rise even higher should disruptions worsen or continue for a longer period,” UBS commodity analyst Giovanni Staunovo said.

A prolonged war in Ukraine could push Brent above $150 per barrel, he said.

Analysts at Bank of America said if most of Russia’s oil exports were cut off, there could be a shortfall of 5 million barrels per day (bpd) or larger than that, pushing prices as high as $200.

Russia is the world’s top exporter of crude and oil products combined, with exports of around 7 million bpd, or 7% of global supply. Some volumes of Kazakhstan’s oil exports from Russian ports have also faced complications.

Meanwhile, talks to revive Iran’s 2015 nuclear deal with world powers were mired in uncertainty after Russia demanded a U.S. guarantee that sanctions it faces over the Ukraine conflict would not hurt its trade with Tehran. China also raised new demands, sources said.

Iran’s Foreign Minister Hossein Amirabdollahian said Tehran would not allow “any foreign elements to undermine its national interests,” Iran’s state media reported, while the foreign ministry said it awaited an explanation from Russia.

France told Russia not to resort to blackmail over efforts to revive the nuclear deal, while Iran’s top security official said the outlook for the talks “remains unclear.”

Iran will take several months to restore oil flows even if it reaches a nuclear deal, analysts said.

Separately, U.S. and Venezuelan officials discussed the possibility of easing oil sanctions on Venezuela but made scant progress toward a deal in their first high-level bilateral talks in years, five sources familiar with the matter said, as Washington seeks to separate Russia from one of its key allies.

Elsewhere in Iraq, the West Qurna 2 oilfield will resume operations on Tuesday and production will increase gradually to reach its normal output of 400,000 barrels per day, two oil sources told Reuters on Monday. The oilfield was shut down temporarily for maintenance last month.