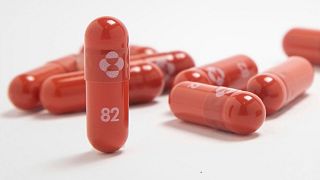 A World Health Organisation (WHO) panel recommended on Wednesday the use of an anti-covid pill to treat those at high risk of hospitalisation.

It is the first oral antiviral drug to be included in the WHO’s treatment guide for COVID-19.

The pill, called molnupiravir, was developed by US pharmaceutical company Merck and is also known by the brand name Lagevrio.

How does the Merck anti-covid pill work?

It’s an antiviral drug that targets the enzyme the coronavirus uses to replicate itself.

Used as early as possible after infection, it can help prevent more severe symptoms developing.

It’s recommended to be taken twice a day for five days after symptoms of the virus appear.

Why did the WHO only recommend the Merck pill for high-risk people?

The WHO said that as it is a new medicine with little safety data, it recommends “active monitoring for drug safety, along with other strategies to mitigate potential harms”.

It’s also for this reason that it only recommends the drug for those at the highest risk of hospitalisation, such as those who have not received a COVID-19 vaccination, older people, people with immunodeficiencies and people living with chronic diseases.

Wednesday’s recommendation is based on new data from six randomised controlled trials involving 4,796 patients, the largest dataset for this drug so far.

Evidence from these trials suggests that molnupiravir reduces the risk of hospital admission - 43 fewer admissions per 1,000 patients at highest risk - and time to symptom resolution with an average of 3.4 fewer days.

It also suggests a small effect on mortality with 6 fewer deaths per 1,000 patients.

The European Medicines Agency (EMA) has not yet approved the drug for use and its review is ongoing. However, the UK and the US granted approval late last year.

Demand for the Merck pill has been weak in the US because of the low reported efficacy and the safety concerns.

A study last year by the pharmaceutical company found that the drug reduced the risk of hospitalisation by 30 per cent.

The results of a phase three trial of molnupiravir were released by Indian researchers on February 18. It included 1218 COVID patients and found the pill reduced the risk of hospitalisation by 65 per cent.

The WHO also noted that cost and availability issues associated with molnupiravir may make access to low and middle income countries challenging and exacerbate health inequity.