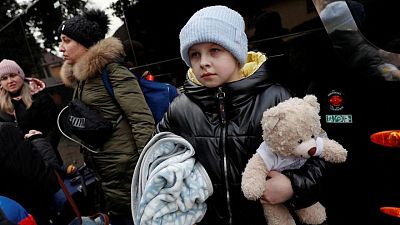 – Companies across Europe and North America have begun offering aid to Ukrainian authorities and people fleeing war following Russia’s invasion, as hundreds of thousands leave their homes and head to safety in Poland and other neighbouring countries.

The following are some companies which have offered support. More are expected to follow in the coming days.

TotalEnergies said on Tuesday it would provide fuel to the Ukrainian authorities and aid to refugees in Europe, but stopped short of joining rivals Shell and BP in planning to exit positions in oil-rich Russia.

More than a dozen telecom providers are either providing free international calls to Ukraine or are scrapping roaming charges there.

Poland’s largest food retailer Biedronka said it would hire family members of its 1,800 Ukrainian employees, who would each receive a 1,000 zloty ($233) grant. It also pledged to allocate $1.2 million to deliver basic food, hygiene and cleaning products to refugees.

The supermarket chain, owned by Portugal’s Jeronimo Martins, also said on Tuesday it would withdraw products made in Russia and Belarus, including Beluga and Russian Standard vodka.

Airbnb CEO Brian Chesky said on Monday the rental firm was working with its hosts to house up to 100,000 Ukrainian refugees for free.

Polish hotel chain Arche Hotels said on Saturday it had already lodged 1,000 refugees as it prepares to accommodate 5,000, while its establishment in Lublin, 100 km (62 miles) from the border, had collected bedding, clothing, Polish language books and toys for children fleeing Ukraine.

Private provider LuxMed said it was providing free medical assistance to people from Ukraine, with doctors and paramedics stationed near the border, along with Swedish Medicover which said it had launched a Ukrainian language helpline.

Polish PKP Intercity said on Saturday its trains would carry Ukrainian citizens for free from the border, while Deutsche Bahn is offering Ukrainian passport or ID-card holders free travel on its long-distance trains from Poland to Germany.

Flixbus said it had given out 1,000 free tickets in the first 15 hours since it began offering the service on Sunday, and that it would send 40 buses free-of-charge to the Ukrainian-Polish border with routes from Przemysl, near the main border crossing of Medyka.

Car rental companies Panek Panek CarSharing and 4Mobility said they would allocate parts of their fleet for transport to the border and invited volunteers to help.

Trans.EU on Sunday pledged nearly $500,000 in aid for Ukrainians and said it was organising a network of carriers to bring supplies from Western Europe to Ukraine.

The CEO of Polish parcel locker firm InPost said it would use parts of its fleet and drivers to transport aid packages collected by Polish communities to Ukraine.

BNP Paribas, which operates in Ukraine through Ukrsibbank with around 5,000 employees across the country, said it was working to maintain its activities as much as possible there.

JPMorgan Chase & Co and Wells Fargo & Co, two of the largest U.S. banks, have pledged to donate $1 million each to groups supporting Ukraine and Ukrainian refugees.