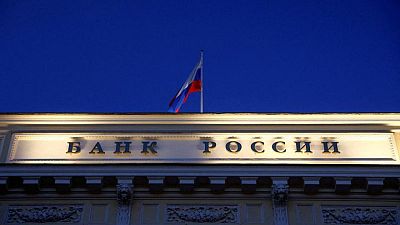 By Alexander Marrow and Andrey Ostroukh

MOSCOW – Clients of some Russian banks under western sanctions will no longer be able to use their cards abroad or with mobile payment systems from Apple and Google, the central bank said on Friday, as it stepped up support for banks.

U.S., EU and British leaders targeted Russian banks with sanctions designed to punish Moscow for sending troops to Ukraine, a move that drew global condemnation and sent the rouble sinking to record lows.

The central bank said the debit and credit cards of sanctioned banks, which it listed as VTB, private lender Sovcombank, Novikombank, Promsvyazbank and Otkritie Bank, would keep working in Russia without restrictions.

“Cards from these banks will not be able to be used with the ApplePay and GooglePay services, but standard contact or contactless payment with these cards is available in full throughout Russia,” the central bank said.

The central bank did not mention dominant lender Sberbank, which said late on Thursday it was operating normally and studying the implications of sanctions.

The U.S. Treasury said on Thursday U.S. banks must sever their correspondent banking ties with Sberbank within 30 days, while Britain said it would impose asset freezes against all major Russian banks.

Sberbank serves nearly 102 million people in Russia and is present in 17 other countries. Russia had 370 banks as of early 2022.

Addressing the impact of sanctions, the central bank announced measures to support the banking sector and the rouble to ensure financial stability. The central bank also eased regulatory requirements for the sector and told banks to consider postponing dividends and bonus payments to managers.

Some of the sanctioned banks sought to assuage customers’ fears on Friday by promising that funds were safe.

“The banking community is prepared for different scenarios: we have enough liquidity to meet demand and there are no restrictions on withdrawing cash either at ATMs or branches,” Sberbank, VTB, Alfa-Bank and Otkritie said in a joint statement.

Private lender Alfa-Bank said the penalties have only banned it from issuing shares, which it was not planning to do anyway. Alfa-Bank said it was continuing to carry out cross-border transactions via the SWIFT global interbank payments system.