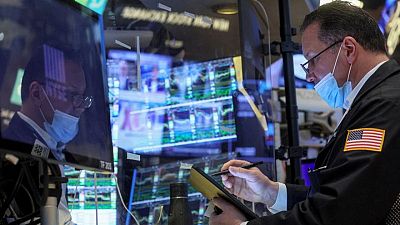 Putin described Ukraine as an integral part of Russia’s history, with eastern Ukraine made up of ancient Russian lands, and he was confident the Russian people would support his decision.

Under treaties signed with the separatist leaders by Putin that were submitted for ratification by parliament, Russia has acquired the right to build military bases in Ukraine’s two breakaway regions.

U.S. stock markets were closed on Monday for the Presidents’ Day holiday.

Ukrainian President Volodymyr Zelenskiy said Ukraine was committed to peace and diplomacy, accusing Russia of ruining peace talks, and ruled out making any territorial concessions in an address to the nation.

Putin ordered the Russian army to launch what Moscow called a peacekeeping operation in the area and a Reuters witness saw columns of military vehicles, including tanks, on the outskirts of Donetsk.

In response, U.S. President Joe Biden signed an executive order for a halt to all U.S. economic activity in the breakaway regions and a ban on import of all goods from those areas as well as investment there. Britain also vowed to impose sanctions while Japan’s Yomiuri newspaper reported Tokyo will likely join U.S.-led sanctions.

“This infighting has been going on since 2014 and Russia has been supporting them without necessarily recognizing them as republics, today he formalized it so that now ramps it up again,” said Ken Polcari, managing partner at Kace Capital Advisors in Boca Raton, Florida.

“The markets are going to react and if Russia pushes to invade then all the threats that have been made, like the sanctions, go into effect.”

Oil prices rose as the Ukraine news exacerbated existing supply concerns that have pushed prices near $100 a barrel. The S&P energy sector has been by far the best performer in 2022, up nearly 22%, and one of only two S&P sectors that are positive on the year.

Gold gained ground as investors moved away from risky assets, touching $1,913.89 per ounce, its highest since June 1.

U.S. equity markets have been under pressure in recent weeks as rising inflation has put the Federal Reserve on a path to tightening its monetary policy, likely to begin at its March meeting, while simmering tensions in Ukraine have grown.

Later in the week, personal consumption expenditures data will be released and is likely to cement expectations the central bank will begin raising interest rates next month.

Fed Governor Michelle Bowman said on Monday that she will assess incoming economic data over the next three weeks in deciding whether a half percentage point interest rate rise at the central bank’s next meeting in March is needed, highlighting the division among policymakers about how aggressive to be in starting to tighten policy.

The benchmark S&P 500 dropped for a second straight week on Friday, and is down 9.3% from its Jan. 3 record closing high, just shy of correction territory, commonly viewed as a drop of 10% from a high.