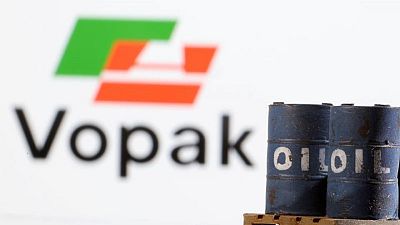 -Dutch oil and chemical storage group Vopak missed quarterly profit forecasts on Wednesday, sending its shares as much as 6% lower as its CEO blamed volatility and lower demand.

Dick Richelle, who took over as chief executive in January, told Reuters that the coronavirus pandemic was still causing some market volatility in the markets but the group had so far coped “relatively well” in terms of project construction.

“It’s a question whether we were just lucky with Omicron or whether the next variant is going to be a more nasty one,” he said after describing 2021 as “an atypical year”.

Vopak shares, which fell nearly 6% in early trading, were down 4.6% at 1132 GMT after the Rotterdam-based group reported a net profit of 69.1 million euros ($78.4 million) in the last three months of 2021, up 25% from a year earlier but below analysts’ consensus, hampered by higher financing costs.

“The results were not exciting,” ING analyst Quirijn Mulder said, adding benefits from expansion in China or Australia were partially offset by divestments as Vopak shifts away from oil.

The group, which hopes to increase the share of new energies such as hydrogen, ammonia, CO2, biofuels and sustainable feedstocks in its worldwide terminal portfolio, expects growth investments to remain below 300 million euros this year.

Vopak, whose business was around 30-35% oil storage in 2021, forecast a cost base of around 645 million euros for 2022, which KBC analyst Olivier Vandewoude flagged was more than expected.

Kepler Cheuvreux’s Andre Mulder said the full-year outlook was “clouded as ever” as Vopak did not mention earnings development from existing operations or give a split in expected core profit (EBITDA) growth contributions in 2022 and 2023.