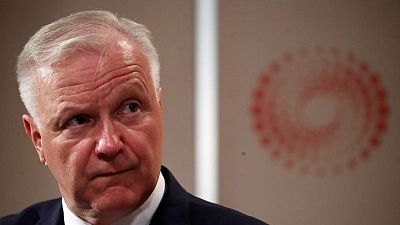 The ECB last week walked back on a pledge not to raise rates in 2022 and policymakers are now looking at how to start unwinding stimulus that has kept the euro zone afloat for years.

“In an uncertain situation – I also refer to the remaining geopolitical tension and its possible implications on energy prices and growth – it is better to watch than be sorry as the old saying goes, or to progress gradually and step by step in normalising the monetary policy,” Rehn said in Helsinki.

Rehn echoed the words https://www.reuters.com/world/europe/euro-zone-inflation-could-subside-before-becoming-entrenched-lagarde-2022-02-07 of the ECB’s President Christine Lagarde who on Monday said that any adjustment to monetary policy would be gradual.

Speaking at an event he organised to mark two decades of common currency in the euro zone, Rehn highlighted the euro’s importance in strengthening unity within the European Union amid geopolitical turmoil that causes energy prices to rise and inflation to speed up.

Rehn said the ECB board had estimated there was a risk of inflation speeding up faster than expected.

“The ECB board works with all its tools to ensure that inflation will stabilize at its 2% target on medium term,” Rehn said.

However, Rehn reminded that energy prices were out of monetary policy’s scope of influence.

He said he believed energy prices would remain at a high level for a number of reasons, including low reserves and the need to replenish them after high demand caused by the cold season will subside in Europe.

The ECB board is closely watching wage inflation in Europe, in order to define the right moment for its rate hike, Rehn said.

When comparing the ECB’s policy decisions with those of the U.S. Federal Reserve, he said it was worth noting that amid pandemic recovery wages have risen 5% to 10% in the United States and only around 2.5% in Europe on average.