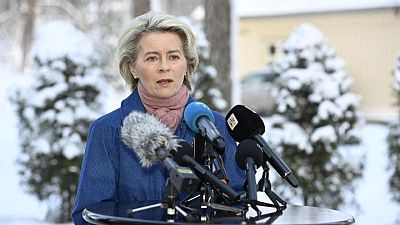 By Kate Abnett and Sabine Siebold

BRUSSELS -The European Union is talking to the United States and other suppliers about boosting gas deliveries to Europe amid concern over supply from Russia, EU Commission President Ursula von der Leyen said.

“We are building a partnership for energy security with the United States, which is primarily about more LNG gas supplies. We are talking to other gas suppliers, for example Norway, about increasing their supplies to Europe,” von der Leyen told a conference organised by German media Der Tagesspiegel, Die Zeit, Handelsblatt and Wirtschaftswoche on Monday.

Escalating tensions between the West and Moscow over Ukraine have raised concerns about Russian gas flows to Europe. Prices have soared to record levels in recent months amid factors including lower-than-expected imports from Russia.

Europe’s gas storage is around 10% less than usual for the time of year. Gazprom has said it is fulfilling all long-term contracts, but has been accused by EU officials and the International Energy Agency of contributing to an undersupply to Europe amid the standoff over Ukraine.

“There are increasing signs that the Kremlin is continuing to use gas supplies as a means of exerting political pressure,” she said.

Russia supplies around 40% of EU gas. The potential impact on that supply if Russia invades Ukraine has prompted an EU drive to increase supplies from other countries.

The EU has said its storage infrastructure and ability to import more LNG should buffer countries against major shocks, although analysts say a full halt to Russian supply would also require emergency measures like factory closures.

Von der Leyen said gas prices could stay stuck at high levels. Most EU countries have rolled out tax breaks, subsidies and other measures to shield consumers from higher bills in response to the recent price surge.

“It cannot be ruled out that gas prices could remain at a high level for a while,” she said.