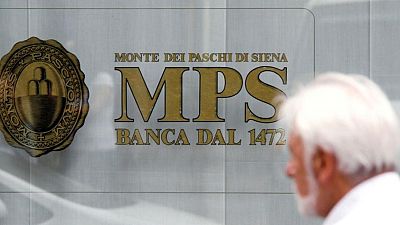 MPS is negotiating new turnaround goals with European authorities ahead of a 2.5 billion euro ($3 billion) capital raising that will add to the bill for Italian taxpayers, though MPS must also convince private investors to pitch in.

Following the collapse in talks, Italy is now negotiating with Brussels a new deadline to cut the 64% stake in MPS it acquired after spending 5.4 billion euros to rescue Italy’s fourth-largest bank.

MPS on Monday reported a 79 million euro fourth-quarter loss after putting aside 222 million euros in the period against loan losses.

MPS said it had also booked losses on past securitisation sales of bad loans.

The bank’s board on Monday unanimously voted to name Lovaglio, 66, as chief executive and general manager after stripping Bastianini of his powers, though the former CEO has stayed on as a director as he resisted pressure to resign.

Bastianini, formerly at regional lender Carige, took the role in 2020 after predecessor Marco Morelli declined to serve for another mandate.

The appointment of Bastianini was sponsored by the 5-Star Movement, which is part of Italy’s ruling coalition and has always advocated postponing the re-privatisation of MPS.

Italy wants to push the cut-off date to return MPS into private hands past 2023 and keep it a secret, after the previous deadline complicated talks with UniCredit, sources have said.

Talks with the EU are ongoing and MPS finance chief Giuseppe Sica on Monday failed to provide any indication on timing. He said MPS would try to move fast, though its improved capital position meant it did not have to rush.

MPS said it may have a 150 million euro capital shortfall this year, rising to as much as 500 million euros in March 2023.

During a more than four-decade career at UniCredit, Lovaglio led the group’s Polish unit Pekao from 2011 to 2017, when UniCredit sold its controlling stake.

In 2019, Lovaglio took the reins of regional bank Creval and steered it towards last year’s takeover by Credit Agricole Italy.